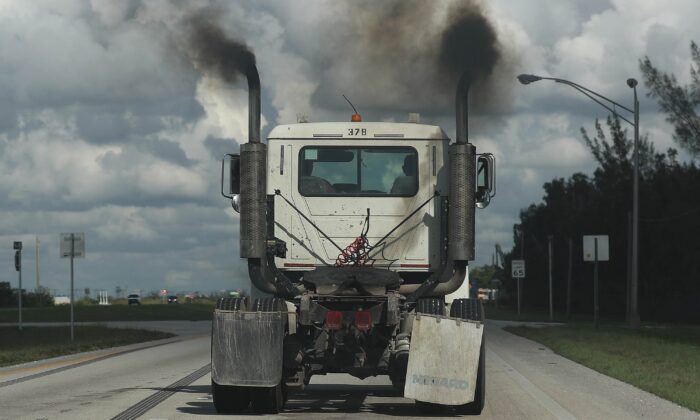 Smoke pours from the exhaust pipes on a truck in Miami, Florida, on Nov. 5, 2019. (Joe Raedle/Getty Images)

U.S. Environmental Protection Agency (EPA) Regional Administrator Pete Lopez visited New Jersey’s Port Elizabeth last week to outline the steps the EPA is taking to advance the Cleaner Trucks Initiative (CTI). The new rules for truck engines will focus on reducing pollutants from heavy-duty engines that cause asthma and even lung cancer. Lopez said the EPA is now seeking pre-proposal comments (pdf) from the public and interested stakeholders on the matter.

The EPA’s Clean Trucks Initiative, however, takes a markedly different approach to the “Multi-State Medium- and Heavy-Duty Zero Emission Vehicle Initiative” (pdf) proposed in December by a group of 8 states and the District of Colombia. The multi-state initiative focuses much more heavily on decarbonization and combating climate change through the introduction of heavy-duty zero-emission vehicles or ZEVs, such as battery- or hydrogen-powered trucks. The recurring theme of the EPA’s CTI, in contrast, is to secure improvements in human health through incremental improvements in existing technologies and research into new ones—without forcing a revolution in trucking technology.

The CTI’s Advance Notice of Proposed Rulemaking (pdf) stretches to some 97 pages as it outlines the EPA’s approach. Over the course of those 97 pages, “carbon” is mentioned three times, but “climate,” “climate change” or “global warming” cannot be found. Instead, the terms “health” or “healthy” feature 19 times in all. The Multi-State ZEV initiative put forward by California, Oregon, New Jersey, Rhode Island,  Connecticut, Massachusetts, Maine, Vermont, and the District of Colombia comes to approximately one page of text. It mentions “climate crisis,” “climate change” or “climate action” four times, but “health” only once.

EPA Administrator Andrew Wheeler launched the CTI officially in mid-November. According to Wheeler, “This initiative will help modernize heavy-duty truck engines, improving their efficiency and providing cleaner air for all Americans.” Wheeler said the new rules “will establish updated standards to address nitrogen oxide emissions from heavy-duty trucks. We will do this in a manner that improves air quality and protects public health without jeopardizing the historic economic growth we’ve achieved under President Trump.”

Wheeler stated, “Thanks largely to innovation and technology, the U.S. has made big reductions in NOx emissions over the past several decades. Since 2000, NOx emissions in the U.S. have been reduced by 52 percent. However, it is estimated that heavy-duty trucks will be responsible for one-third of NOx emissions from transportation in 2025, and it’s been nearly 20 years since the EPA last set NOx emissions standards for heavy duty trucks.”

He also spoke to the Trump Administration policy of deregulation and cutting regulatory costs and red tape. “Part of this initiative will also be to cut unnecessary red tape while simplifying certification and compliance requirements for heavy-duty vehicles,” said Wheeler. “For the past two decades, additional regulatory requirements have been added to on-highway heavy duty vehicles in a piecemeal fashion. This has resulted in some overly complex and costly requirements that do little to actually improve the environment.” He said the EPA will review current requirements and root out inefficiencies while ensuring “a common-sense, 50-state approach” to regulation.

The War on Nitrogen Oxide

NYCDEP states that “Nitrogen oxides are gases produced by fuel combustion. They include nitric oxide (NO), which is rapidly converted to nitrogen dioxide (NO2) after emission from vehicles and other sources. Exposures have been associated with lung irritation, emergency department visits and hospital admissions for respiratory conditions. Nitrogen oxides also contribute to the formation of ozone.” According to the American Lung Association, “Ozone is an air pollutant that causes essentially a ‘sunburn’ in the lungs and can be deadly.”

According to the EPA, “Short-term exposures to NO2 (an oxide of nitrogen) can aggravate respiratory diseases, particularly asthma, leading to respiratory symptoms, hospital admissions and emergency department visits. Long-term exposures to NO2 have been shown to contribute to asthma development and may also increase susceptibility to respiratory infections. Ozone exposure reduces lung function and causes respiratory symptoms, such as coughing and shortness of breath. Ozone exposure also aggravates asthma and lung diseases such as emphysema, leading to increased medication use, hospital admissions, and emergency department visits.”

The California Air Resources Board (CARB) states that fuels such as gasoline and diesel consumed for transportation cause around 80 percent of the NOx gases that form ozone. Ozone is a primary component of smog, which continues to plague cities such as Los Angeles.

According to the U.S. Energy Information Administration (EIA), gasoline made up 54 percent of transportation fossil fuels consumed in 2018 (including cars and light trucks), while distillates such as diesel constituted some 23 percent, with diesel favored for engines in heavy trucks due to its stability and particularly high energy density. The EPA states that “Gasoline-fueled engines … tend to be lighter and less expensive than diesel engines although less durable and less fuel efficient.”

According to the EPA’s Advance Notice of the Proposed Rule (pdf), “NOx emissions in the U.S. have dropped by more than 40 percent over the past decade,” though the EPA projects that heavy-duty vehicles will “continue to be one of the largest contributors to the mobile source NOx inventory in 2028.” According to American Trucking Association (ATA) Executive Vice President of Advocacy, Bill Sullivan, “Since 1985, newly manufactured trucks have reduced NOx emissions by over 98%, but our work is not yet done.”

Due to the continued contribution of heavy-duty trucks to the NOx inventory, more than 20 organizations, including state and local air agencies from across the country, petitioned the EPA to develop more stringent NOx emission standards for on-road heavy-duty engines. According to the EPA, “It became clear that there is broad support for federal action in collaboration with the California Air Resources Board (CARB). So-called ’50-state’ standards enable technology suppliers and manufacturers to efficiently produce a single set of reliable and compliant products.”

Furthermore, the “EPA and CARB often cooperate during the implementation of highway heavy-duty standards. Thus, for many years the regulated industry has been able to design a single product line of engines and vehicles which can be certified to both EPA and CARB emission standards (which have been the same) and sold in all 50 states.”

The EPA is thus seeking to harmonize efforts to lower NOx emission standards, while also focusing on issues such as implementing real-world testing protocols, ensuring the longer useful life of any regulations, considering future engine rebuilds, and introducing “incentives to encourage the transition to current- and next-generation cleaner technologies as soon as possible.” This will be done by reducing in-use emissions (rather than those measured on stationary testing apparatus), considering cost impacts on an industry pressed by higher wage and insurance costs, encouraging innovation and early compliance and ensuring a coordinated 50-state program.

The EPA says that “Current heavy-duty engine emission standards reduced PM and NOx tailpipe emissions by over 90 percent for emissions measured using the specified test procedures, but their impact on in-use emissions during real-world operation is less clear.” Among the reasons for this are that “NOx emissions can be significantly higher during engine warm-up, idling, and certain other types of operation that result in low load on the engine or transitioning from low to high loads.”

The EPA states that modern diesel engines rely heavily upon catalytic aftertreatment to meet emission standards, with oxidation catalysts reducing hydrocarbons (HC) and carbon monoxide (CO), diesel particle filters (DPFs) reducing PM, and selective catalytic reduction (SCR) catalysts reducing NOx. Current designs typically include the diesel oxidation catalyst (DOC) function as part of the broader DPF/SCR system. However, SCR systems (including the DOC function) are effective only when the exhaust temperature is sufficiently high. All three types of aftertreatment also have the potential to lose effectiveness if the catalysts degrade.

Truck engine manufacturers will be encouraged to find innovative solutions to reduce real-world emissions, including during lower-temperature operations such as when idling, warming the engine after starting, and driving downhill or on deadhead trips. According to the EPA, “We have also observed an industry trend toward engine down-speeding—that is, designing engines to do more of their work at lower engine speeds where frictional losses are lower.”

Lower speeds, however, normally result in lower operating temperatures, and some technologies are then quite ineffective. “Review of in-use data has indicated that SCR-based emission controls systems for diesel engines are not functional over a significant fraction of real-world operation due to low aftertreatment temperatures, which are often the result of extended time at low load and idle operation.”

According to a statement (pdf) from Jed Mandel, president of the Truck & Engine Manufacturers Association, which includes industry giants such as Cummins, Navistar, Caterpillar, AGCO, GM and Ford,  the EPA’s Cleaner Trucks Initiative provides the opportunity to move from a prescriptive-based compliance program to one that is performance-based. “By doing so, we can achieve real-world NOx reductions, implement modern in-use compliance protocols, and streamline current redundant regulations,” Mandel explained. “We need to work together to make those changes while preserving the necessary diversity of the commercial vehicle marketplace and protecting the needs of our customers for fuel-efficient, durable, and reliable products.”