Updating Dow’s Dominance In Polyurethane After The Split

Fiscal year 2018 was an extremely strong year for the Global Polyurethane market, as revenues in the market grew over 20%.

Fiscal year 2019 has started off disappointing for the chemical stocks who are key competitors in polyurethane, and falling isocyanates prices in Q1 have hurt their net sales and margins.

The long-term projections for the polyurethane market were maintained in a recent research report, stating demand in end application uses such as construction and furniture has continued to expand.

These opposing developments should keep Dow shareholders watchful over the next several months, but I think the struggles in II&I are short term rather than long term.

Last May, I wrote about how DowDuPont’s, now split into Dow (DOW) and DuPont (DD), dominance in the Polyurethane market was an underappreciated growth driver. As mentioned in the article, the company was still undergoing the fallout from 3 spin-offs, and those transactions have finally completed. We still haven’t seen a new annual report/10-k for either company since the final June 1, 2019, splits were completed, but they have released slides from the latest earnings call presentation, and there was some news from their earnings news release that we can digest.

First, let’s examine their 2018 results. From the 10-K released in February, here’s how revenue broke down for the year: 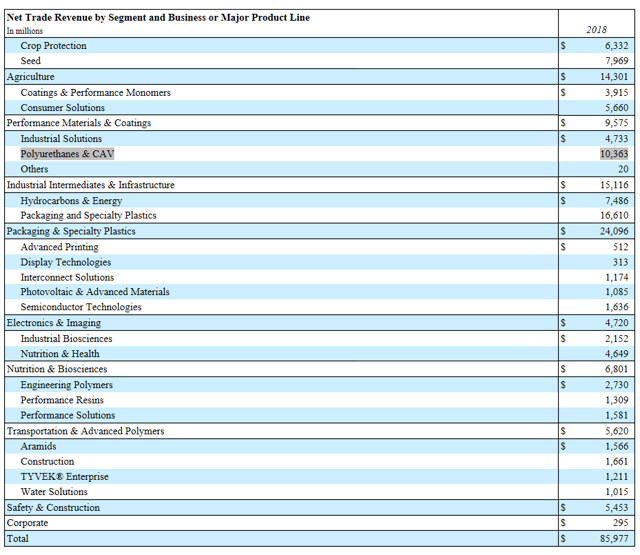 I went ahead and highlighted the Polyurethanes & CAV business for effect. Some of the other businesses, such as agriculture and those related (Crop Protection and Seed) are now part of the new Corteva company (CTVA) and won’t be included in the 2019 10-k. Comparing this to 2017, we see the following revenue breakdown among the various segments and businesses:

The percentage of the Polyurethanes & CAV product lines that comprises the Industrial Intermediates & Infrastructure doesn’t appear to be disclosed in the 2018 10-k, but by taking the total for the segment, we see an increase from $12.6 billion in 2017 to $15.1 billion in 2018, representing an impressive YOY CAGR of 19.8%. With my last DowDuPont article revealing the projection of growth in polyurethane to be around 7%, this growth rate implies management’s ability to maximize its market positioning and compound the growth that’s already inherent in the industry (through increased demand in the growing markets that the products are sold to).

Updating these figures to the latest May 2, 2019, news release (for the 1st Quarter of 2019), sales for the Polyurethanes & CAV business were lower due to price declines in isocyanates, which were actually up on volume but down for the total. Seeing a commodity pricing effect on sales like this is less concerning than other industry news, and it appears to be more relevant on the CAV side of the business rather than the Polyurethanes side. Management wasn’t completely clear to what the extent that sales were lower due to this business, but they did disclose that the Industrial Intermediates & Infrastructure segment was down 8% in net sales at $3.4 billion for the quarter. This also had to do with price declines and partly to do with currency fluctuations. I’d guess that since the Polyurethanes & CAV business made up over two thirds of the II&I segment last year, I’d estimate net sales for the Polyurethanes & CAV business to be down 5-8% as a result.

A new Market Research Report on the polyurethane industry has just been released by Grand View Research, updated from last year’s numbers that I quoted in my article. Last year, the total global market was estimated at $53 billion, and today, that number has stretched to an estimated $65.5 billion for 2018, representing a YOY CAGR of 23.5%. Presumably, this is where most of the growth for the Polyurethanes & CAV business came from in the Industrial Intermediates & Infrastructure Segment’s 2017-2018 growth. Updating the projections over the next 5-6 years, Grand View Research still has the global industry growing at about 7% CAGR: 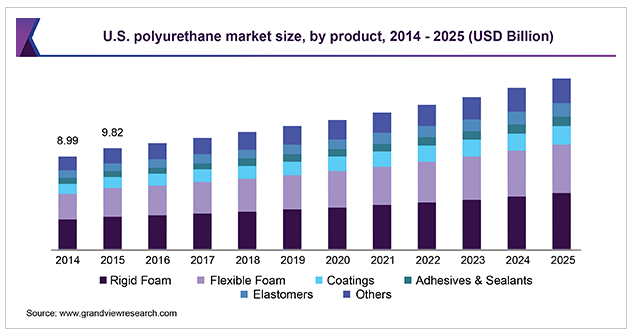 The report cites the increasing use of polyurethane materials such as flexible foam inside various mattress, bedding, and furniture products as a major driver for the significant growth that the market saw in 2018. The Asia Pacific region is a place where flexible foam dominates, due to both environmental and energy-related reasons, as well as its many physical applications. China, particularly, is seeing growth in this small niche, which is expected to continue, and is currently projected to see around 8.5% CAGR growth in revenues over the next 5-6 years.

The slight pullback in the DD 2019 sales could partly be a reversion to the mean from the large increase witnessed from the 2017 to 2018 fiscal years as disclosed in the research report. As long as demand continues and the application industries continue to expand (Furniture & Interiors, Construction, Electronics & Applications, Automotive, Footwear, Packaging, etc.), there’s not much reason to over-react over the 1st quarter negative news, and investors who own stocks with exposure to this industry should still feel confident over the very long term.

After the news of the net sales declines by DowDuPont, it’s also a good idea to examine some of the other major players in the polyurethane market and see if their results differed or stayed around the same, which would be a better indication if it has to do with the marketplace rather than a misstep or negative fallout from the final spinoffs for Dow and DuPont. This chart estimated the polyurethane market share during fiscal year 2017, which can help identify a couple of key competitors that are more representative of the entire industry:

How Dow’s Q1 Stacked up Against Competitors

Covestro (OTCPK:CVVTF): According to a recent press release on April 29, 2019, the company reported a large drop in sales by 24.3%. Weakening demand in the auto industry was to partly blame for this drop. I recently wrote an SA article on how global auto demand is expected to continue to be flat, but the automotive industry wasn’t the only one to blame. Covestro also cited falling selling prices, which goes hand-in-hand with what DuPont reported in their news release, which I’m speculating has a greater impact than the bleak automotive picture.

Covestro did report that volume stayed almost the same (a drop of -0.2%). So, while both Covestro and DuPont felt the sting of lower prices and margins, DuPont reported that they were able to offset some of the fallout by having increased volume, while Covestro was not and was only able to maintain volume. This is why we see such a large discrepancy in net sales between both companies (-8% vs -24.3%), and it provides context on the struggles for DuPont this quarter. Perhaps, they didn’t do so bad after all.

BASF (OTCQX:BASFY): As reported on Seeking Alpha news, BASF cut their profit guidance recently (July 9, 2019), and it caused many of the stocks in this industry to fall anywhere from 1% to 3% in a single trading session. As DuPont also stated, BASF announced in a press release that the prices of isocyanates were “significantly lower”, and it also led the company to a large YOY decline in margins and EBIT for their Materials segment, which plays in the polyurethane market. As a result of the price declines, analysts for the company revised projections, now estimating sales for Materials to be from a low of 11,114 to a high of 12,986 (in € million). This recent news might mean that Q2 is tough for DuPont and the rest of the polyurethane market as well.

In the Q1 conference call for BASF, the company cited a drop in both volume and prices for their Materials segment, also blaming lower isocyanates prices and weak demand for global automotive: 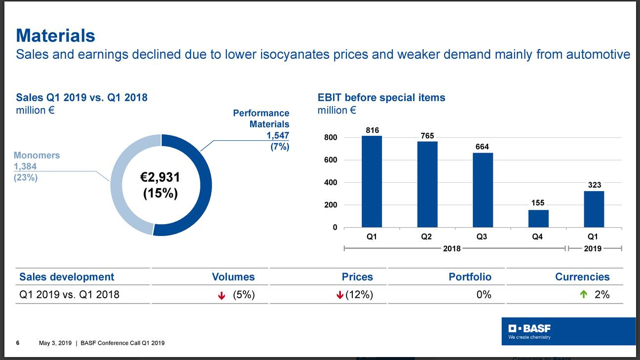 You can see that the EBIT for this segment decreased from 816 million € in Q1 2018 to 323 million € in Q1 2019, indicating significant pressure. Comparing this impact to DowDuPont’s as well, it seems that DowDuPont did really well in increasing volume, while its other two competitors could not.

The falling isocyanates prices that are suppressing the polyurethane industry’s profitability could be temporary and part of a larger market cycle. Prosperity and high profitability tend to attract competitors, which can eventually bring down prices and reverse the trend. Seeing that the growth from 2017 to 2018 was over 20%, I don’t see a concern on these negative figures for 2019.

I’m a little worried about the weakening demand from the auto industry, but this segment is only one of the many end use applications for polyurethane. The Grand View Research report has revenue growth for polyurethane application in that segment to be below the whole industry at 6.7%, and so, a decrease in that number might not be as troublesome as data about slowing demand in construction or furniture and interiors.

For Dow shareholders looking forward, the past several months have been a whirlwind of data, information, and financial reports due to all of the spinoffs. When it comes to the Industrial Intermediates & Infrastructure Segment of the company, polyurethane still remains as a primary growth driver. Until projections are revised over the long term, I think it’s safe to say that the disappointing Q1 results can easily be reversed just as the trend swung from 2017 to 2018 to 2019. In my mind, the great news about growth in construction and furniture offsets the negative news about revenues in polyurethane, leading to a neutral outlook in the coming months.