SINGAPORE (ICIS)–Asia’s benzene demand may improve in July-August with the expected restart of downstream plants from turnarounds, with supply to be curtailed by scheduled shutdowns of two regional facilities.

But the high inventories in the key China market, as well as along the supply chain in Asia, will require time to whittle down, which will hinge on the strength of demand across Asia in the third quarter.

Strong run rates at benzene units in Asia amid turnarounds at downstream styrene monomer (SM), phenol and methyl diphenyl di-isocyanate (MDI) plants caused the build-up in stocks across the region in the first half of this year.

“Most downstream turnarounds will complete in May and June, hence benzene consumption will likely increase from the third quarter,” a Singapore-based trader said.

Availability of benzene will also be curtailed as SK Global and Ulsan Aromatics have scheduled maintenance at their plants in the second half of May/June.

New supplies could also hit Asia in the third quarter, with the start-up Petro Rabigh’s new 400,000 tonne/year benzene facility in the second quarter, although operations at this plant remains erratic.

In Vietnam, Nghi Son Refinery’s 250,000 tonne/year plant is expected to have benzene cargoes available in July.

“Demand for benzene in Asia and the US in the third quarter will play an important role in reducing the supply in the region,” said another trader in Singapore.

The spot east-west arbitrage window has not stayed open throughout the first half of 2018, hampering shipping of cargoes to the US. South Korea and Japan are key exporters of benzene to the US.

“The arbitrage window was largely open in April but became not viable in May,” said a South Korea-based producer.

Benzene is a base chemical used to make other chemicals such as SM, phenol and caprolactam. 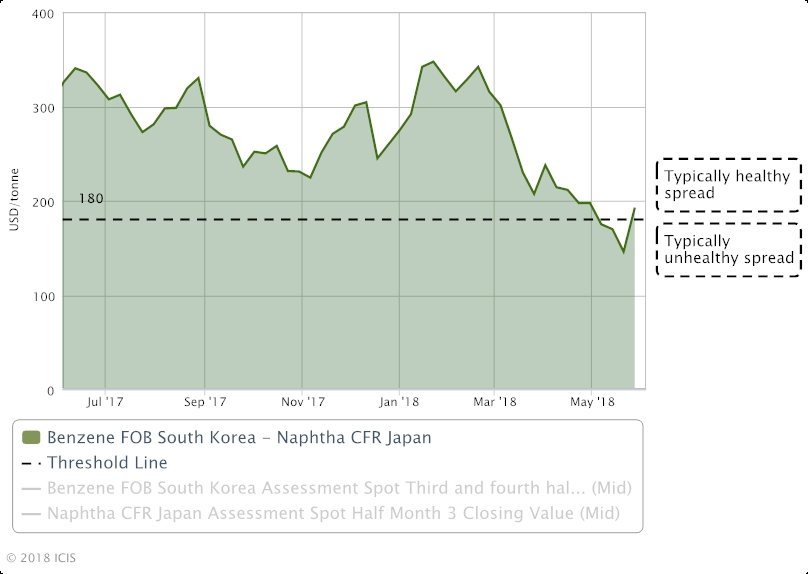 In the second quarter, suppliers in the region were grappling with excess inventories and a lack of outlets for their cargoes.

Most key buyers in China, Taiwan and southeast Asia have sufficient supplies, with little appetite for spot cargoes. Lackluster demand caused the CFR (cost & freight) China prices to fall below FOB (free on board) Korea prices, according to ICIS data.

Premium for spot parcels into Taiwan (CFR) also declined to the low single digits over FOB Korea in the first half of May as buyers had little spot interest.

The situation was just as dismal in southeast Asia, where FOB SE Asia prices traded at a discount of $35/tonne to FOB Korea at one point in the second half of April.

In India, FOB India trades were at a discount of more than $50/tonne to FOB Korea as demand waned.