The last time the price spread was at a similar level was on 15 January 2014, according to ICIS data. The spread between the two products was $246.50/tonne then.

The benzene-toluene price spread for February shipments, on the other hand, was valued at $220-230/tonne, according to ICIS data.

The prompt price gap between the two products has largely been rising since December 2016, and hit $211-214/tonne on the closing of 6 January, because of bullish trading sentiment amid rising US benzene prices and strong Chinese import demand for benzene. This was against a backdrop of generally weak demand for toluene from China, market players said.

While various factors such as largely stable-to-firm upstream crude and naphtha prices have been supporting toluene trading sentiment since the first week of January, weak Chinese import demand has capped the upward price pressure and overall spot trading liquidity for toluene.

The number of CFR China enquiries from importers was described as “scant” by most market participants and “unworkable because of the narrow spread between CFR (cost & freight) China bids and FOB Korea discussion levels”.

There were few Chinese import enquiries as distributors said their margins for back-to-back business were squeezed. Distributors found no reason to stock up on toluene since they could not buy cargoes on a US-denominated CFR basis and sell it directly on a yuan-denominated basis.

The lack of buying activity domestically – especially from the key downstream chemical solvent and pharmaceutical sectors – also deterred importers from entering the spot market for toluene. The operating rate of these units has been unstable since December because of government-led environmental checks.

Demand from the domestic gasoline blending sector is China for toluene has been equally lacklustre because of its unworkable blend value and because of the better affordability of other blendstocks such as xylenes and methyl tertiary butyl ether (MTBE).

“Because of this poor Chinese import demand, toluene has been fluctuating in a boxed range since it lacks the push of real physical consumption of cargoes,” a northeast Asia-based trader said.

Despite the weak Chinese demand, any price decreases for toluene in the short run will still likely be capped because of the perceived shorter supply for February, following scheduled turnarounds at CPC Corp’s No 7 aromatics unit and IRPC’s aromatics unit, and strong run rates of downstream toluene disproportionation (TDP) units in northeast Asia.

“Supply could be limited from integrated refineries [in South Korea] since they can supply more to their downstream TDP units for benzene production so that should create a somewhat price floor for the [toluene] market,” a southeast Asian trader said. 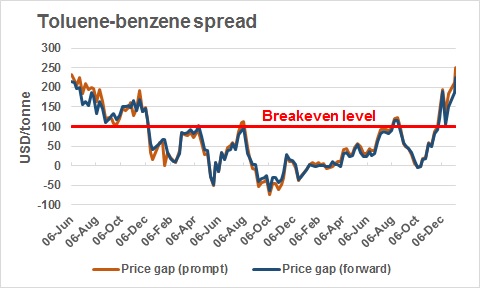 Benzene prices, on the other hand, rose sharply on bullish sentiment from US price spikes. US prices firmed in response to limited exports from Korea and a prolonged closed arbitrage window. Domestic supply is unlikely to provide relief to tightness in the market with turnarounds heard planned on aromatics units as well, said market participants, who added that this is providing further support to trading sentiment.

Benzene prices in China, likewise, were increasing with speculative trading supporting offers. Although downstream end-users have adopted a wait-and-see stance, they have requirements left to cover for operations after the Lunar New Year.

As a result, there are expectations that the benzene-toluene spread will continue to remain wide in February, after the Lunar New Year, because of the conflicting market situations.