BASF focused on digesting recent acquisitions, US tax reform not a panacea – CEO 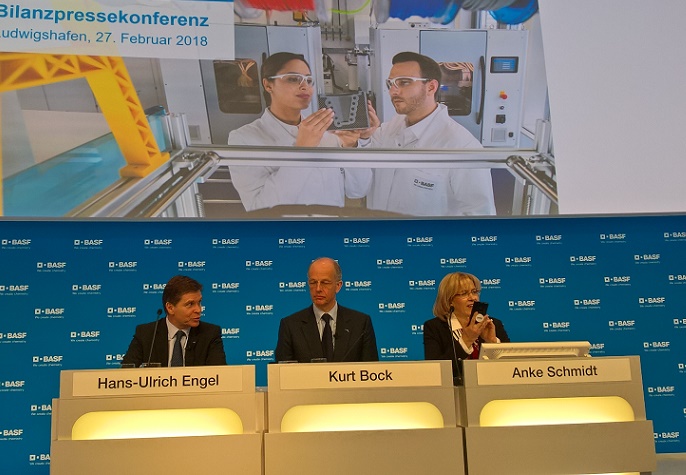 LUDWIGSHAFEN, Germany (ICIS)–BASF’s acquisition spree in recent years will keep the company busy integrating the new businesses and will not continue seeking mergers and acquisitions (M&A) targets, according to the German chemical major’s CEO, although it will keep looking at potential good opportunities.

BASF chief Kurt Bock said BASF will now focus on the acquisitions it has made in the last two years – Chemetall for $3.2bn in 2016 and Solvay’s polyamide assets for €1.6bn in 2017, among others – adding that “investing money is not the difficult thing” but rather to improve “growth and earnings” with the already-acquired businesses.

Bock did not expand much on BASF’s most expensive proposed acquisition, that of Bayer’s seeds and herbicides assets for €5.9bn, as the transaction, agreed in principle in October 2017, is still subject to regulatory approvals, although he did respond to reporters’ questions about the deal’s price tag.

The €5.9bn BASF is willing to pay for the assets came across to many chemical analysts as pricey, although Bock said that the current multiples in the chemicals M&A space would have not allowed for a lower price.

“It is not easy to judge the price if you don’t have the full set of data, and what we have seen [Bayer’s assets] is very good operations, very well run, and what we have offered is completely in line with other acquisitions [within the chemical industry],” said Bock.

“In agrochemicals we know what we are doing and the seeds business was the missing [part] in order to be fully successful.”

The CEO added that the Oil & Gas division will “simply disappear” from BASF’s operational structure as of 1 January 2018, with retroactive effect, after the agreement the company signed with LetterOne in December.

A potential initial public offering (IPO) on the stock exchange of the new entity will take place at the earliest 18 months after the transaction’s close, said the CEO.

“If there are other opportunities [in the M&A space] we’ll take a look at them, but we don’t have a list of things I can present you with,” said Bock.

The CEO was also asked about the US tax reform and how that could boost capital investment, although he added that the country still has “high specific investment costs” which somehow could offset the positive impact coming from lower corporate taxes.

BASF already said in January, when it presented its prelimnary annual results, that the US’ Tax Cuts and Jobs Act had boosted its earnings by €400m through a one-time cash windfall in the fourth quarter.

However, Bock wanted to cool down the enthusiasm for the reform.

“[The reform seems] very positive, and our colleagues and competitors [within chemicals] received it very well. Will that lead to the fact that there will be automatically more investment?” Bock said.

“Many factors come [into place] here, [one of them being] investment costs [in the US], and these are high, the highest globally, it is remarkable really: [currently there is] low interest rates and low taxes but high specific investment costs.”

For BASF overall’s tax bill, however, the US reform will have a small impact, said Bock, forecasting for this year an average tax rate, adding that its German tax bill is the most important and nothing has changed on that front.

“Our tax rate will not dramatically change. It fluctuates between 20% and 25% and that will only change if Germany had a tax reform,” he said, adding that in the 67 pages containing the preliminary agreement to form a government in the country between the current governing CDU and the SPD there was no mention to tax reforms.

According to Bock, the fact that Germany has been without a government for more than five months is worrying for the economy, although he joked about how the lack of new regulations and laws can present businesses with opportunities.

However, the inability of lawmakers to come up with a coalition to form a government since the September elections has meant, said Bock, that the country has been running without a government for almost a year now because the electoral cycle started in the spring of 2017 already.

While on one hand he said the lack of government was bad for the economy, the lack of regulation was not so bad, in his view.

He was referring to the long-running debate about the widely used weed killer glyphosate, which is being subject to a potential licence renewal in the EU for another 10 years.

Chemical companies and trade groups have supported the use of glyphosate arguing it is safe to use, while green groups have argued it can be carcinogenic.

Bock added that BASF’s main worry for 2018 was the euro/dollar exchange rate, which is set to annoy earnings for those companies who, like BASF, have important operations in the US and send their earnings to the eurozone.

The euro accumulates gains of more than 20% against the dollar over the last 12 months.

“The dollar [exchange rate] is really what we are mostly concerned about. Also inflation: US’ labour inflation costs [which have been going] up. Those are things that we have to keep at the back of our minds,” said Bock.

“Then there are wild cards, surprises. I am speculating now, [but imagine] we couldn’t achieve a solution for Brexit [the UK’s departure from the EU in March 2019]: We would fall back to a regime which is WTO standards, but I can’t really imagine that happening.”

The UK’s planned departure from the 28-country block has been marred by the lack of progress in the negotiations after the country voted to exit already in June 2016.

Bock is due to leave his post in May’s annual general meeting (AGM). Although he may come back to BASF board in 2020, he has to wait at least two years to do that as per the German law’s required “cooling period” following departure from a key corporate role.

“Cooling off means cooling off and, as a matter of fact, I will cool off. I’ll come up with something [to do],” concluded Bock.