US September benzene expected to decline

Contract prices generally take direction from the spot market in the week prior to settlement.

Benzene spot prices have been under pressure in August from declines in upstream crude oil and from soft demand as buyers await a price floor.

Benzene spot values fell 10-20 cents/gal on Monday from the week prior. By Wednesday, US benzene deals were heard as low as $1.88/gal FOB.

However, on Thursday WTI futures recovered the early week losses as the US stock market rallied. Week on week, WTI values increased 3.5%.

With lower spot prices this week, the September contract price is expected to decline. But the recent volatility of benzene spot values, upstream crude oil and financial markets, makes the settlement difficult to predict.

Market expectations for the settlement are somewhere near $2.00/gal FOB.

US benzene contract prices generally settle on the last day of the prior month. 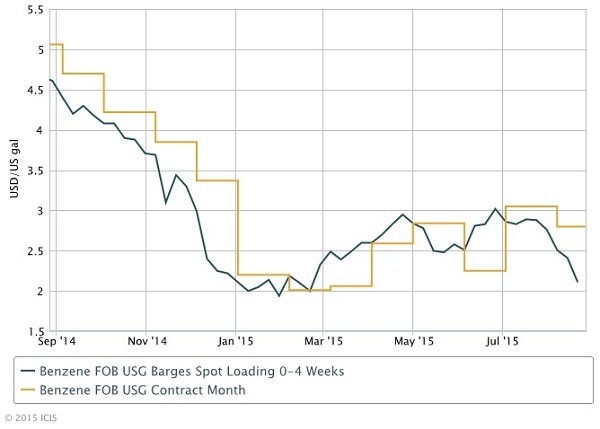