HOUSTON (ICIS)–The US expandable polystyrene (EPS) market was largely quiet this week after prices rolled over from April to May last week, market participants said on Tuesday.

One major reason for the rollover was the direction of feedstock benzene spot prices in April, market sources said.

Additionally, it became apparent in April that EPS demand was lower than expected. Some of that was the result of pre-buying in March, as buyers knew that prices would likely be going up in April.

US and Canada total sales and captive use jumped by 27.6% in March year on year, according to the American Chemistry Council (ACC).

Market participants say that May volumes are increasing from where they were in April. 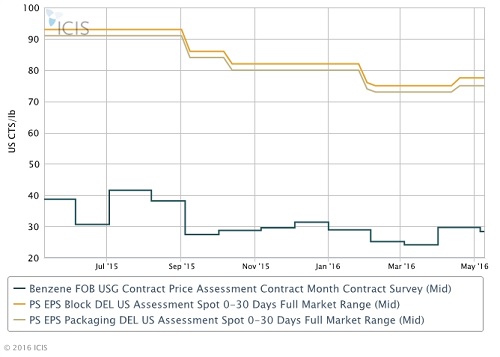