HOUSTON (ICIS)–The US February benzene contract price is expected to settle below $2/gal, sources said on Thursday, which would mark the lowest since May 2009.

The January benzene contract had settled at $2.12/gal, an 18 cents/gal decline from December, as demand lagged late in 2015 and as upstream crude oil values dropped during December.

While demand has recovered and is considered good, weakness in upstream markets has pressured benzene values down during January, with spot prices earlier in the month at their lowest since April 2009.

Despite some recovery, upstream NYMEX West Texas Intermediate (WTI) futures on Thursday were nearly 10% lower than a month ago. While benzene spot prices also recovered slightly since mid-January, uncertainty in the upstream markets has kept benzene at lows similar to 2009.

Benzene contract values are heavily influenced by prices in the benzene spot market. This week, benzene spot prices have ranged $1.85-1.87/gal, compared with a range of $2.04-2.14/gal prior to the January contract settlement.

Market sources expect the February contract to settle in the range of $1.84-1.90/gal.

The US benzene contract is typically settled on the last day of the previous month. The February contract is expected to settle on Friday. 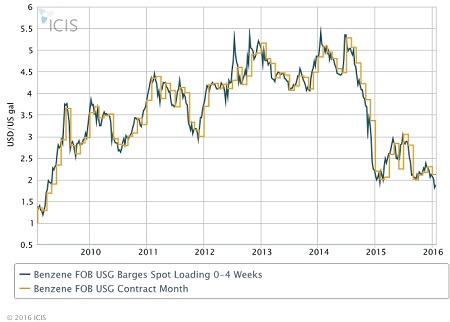