LONDON (ICIS)–Benzene and styrene availability in Europe for the remainder of 2019 will most likely be long, and that length is set to prevail into 2020 on the back of increased Asian capacity. 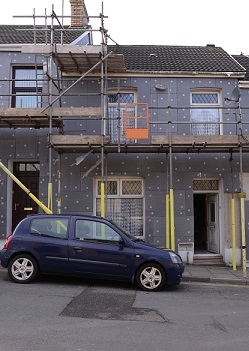 Benzene and styrene are each coming out of the peak turnaround season, set to conclude by the end of June and which went according to plan, leaving little impact in the markets.

There was a massive inventory built-up in preparation for the outages, which caused styrene prices to rise from November to April.

Inventories are now being drawn down.

Benzene prices have been following the US’ global pricing lead and look set to continue that trend for now.

Europe is trading at just below a workable arbitrage to the US. While Europe was the highest-priced region for a long while, it is now second, with Asia third. 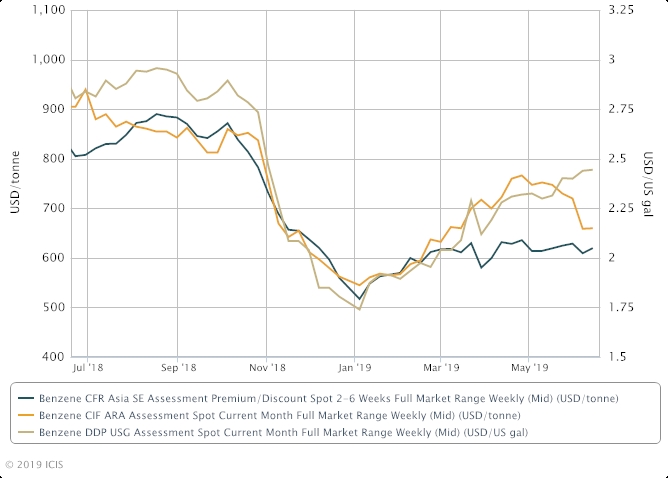 –
Trade is expected to continue being thin in a long market for both products, with business increasingly being done on a contractual basis to limit risks.

A recent surge in pricing has left some derivative producers questioning the prudence of producing incremental tons, and at least two styrene producers noted that rate cuts have already begun.

“I’ve eliminated open [or] spot positions,” one producer said. “I have no incentive to produce spot material.”

Prompt- and forward-month spot benzene prices have risen sharply over the past week amid ongoing supply tightness and multiple short positions, sources said.

June benzene was heard traded as high as 315 cents/gal on Tuesday, up 69 cents over the course of a week. July was heard traded multiple times at 275 cents/gal, up 38 cents week on week. Sources pointed to ship delays and diminished domestic production from poor toluene conversion economics as drivers of the tight supply.

The impact of rising benzene costs was evident in the spot styrene-benzene spread. Spot styrene prices have been relatively stable recently and pricing has been talked at $910-$920/mt or at the netback to European styrene prices. The higher benzene values, however, have pushed the spread into negative territory, last estimated at minus $23/mt, assuming styrene at $920/mt and benzene at 315 cents/gal ($943/mt).

Another noteworthy metric is the impact of higher pricing on styrene producers with tolling agreements. With the June benzene contract at 234 cents/gal and considering the adder to produce styrene, producers have more financial incentive to, if possible, sell the benzene and buy styrene, while keeping a profit of over $100/mt.

Sources added that rate cuts were not likely to be confined to styrene makers but could include other derivatives such as cumene. No confirmed cumene rate cuts were heard at time of publication, however.

Looking ahead, participants anticipate little change headed into July and expect that the July benzene contract will rise significantly, though the exact increase will not be clear until the end of June.

Still, supply is expected to remain tight into the first half of July amid expectations of increased imports. Month to date, benzene imports in June have totaled just over 79,000 mt, and sources anticipate that number could be as high as 130,000 mt by the end of June. Similar volumes are expected in July and August with multiple ships carrying 20,000-30,000 mt of benzene loading out of Asia and amid talk of exports out of Europe as well.

Sources noted that the imports, coupled with rate cuts and the potential for benzene consumers to resell volumes back into the market, could ultimately result in a sharp correction in the market.

“The benzene contract will be high in July and that will push away our polymer customers, but I think they will return in August when the contract falls,” a styrene producer said.