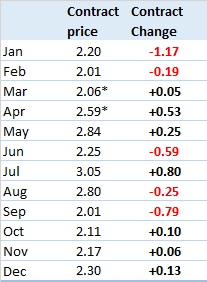 US benzene contract prices are typically settled on the last day of the prior month. However, the December contract was settled just ahead of the Thanksgiving holiday late last week, sources said.

"That would be early, it always settles the last day of the month," one source said.

The increase over the November contract follows higher spot prices in recent weeks. Benzene contract values tend to follow direction in the spot market in the week prior to settlements.

In the week prior to the November settlement, spot prices ranged $2.14-2.17/gal FOB (free on board). Since then, spot prices have been generally stronger and ranged $2.27-2.34/gal FOB last week.

Spot prices have been pressured up by a combination of strong demand and tight supply.

"Mainly less local supply and less imports and very good demand into styrene for export," a trader said about the stronger benzene prices.

US styrene, the largest consumer of US benzene, has been tight due to multiple shutdowns at styrene plants in North America during 2015. The most recent was resolved in late October, increasing consumption of US benzene throughout November.

Benzene demand also has been strong for cyclohexane, an intermediate in the nylon chain, with deals for cyclohexane-grade benzene heard more frequently in November than in previous months in 2015.

Market sources said that benzene demand from other derivative sectors also is strong, including cumene, which is used to make phenol/acetone, and aniline, used to make isocyanates for the polyurethane chain.

Meanwhile, supply for US benzene has been tightening due to lower imports, lower local production, shipping delays and a contamination issue.

Although US benzene imports were at a high level in August and September, market sources indicated that October and November deliveries had been fewer. A congestion issue in the Panama Canal had held up some shipments, and a chloride contamination issue further limited supply. 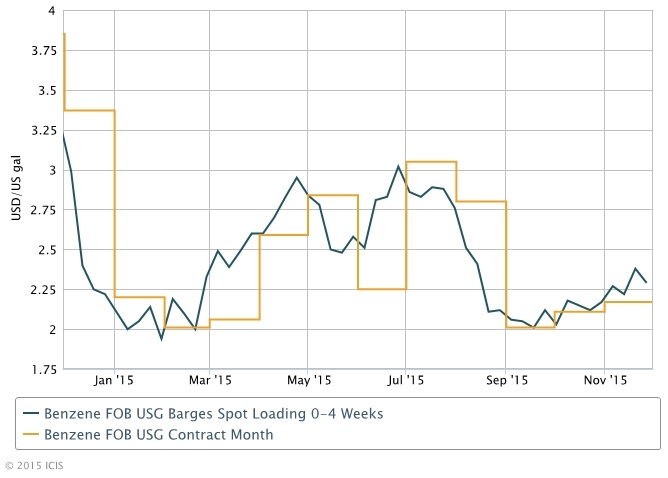