HOUSTON (ICIS)–US spot benzene was assessed lower on Friday, and activity remained muted – as was the case for the second-half of the week in response to sharp declines in upstream crude oil, market participants said.

January and February benzene was assessed between $2.00-2.05/gal on Friday, but no trades were heard to have been done.

Buying interest had been lower prior the holidays, but improved this week until Wednesday when WTI crude dropped by $2/bbl in a single day. Three cargoes totaling 31,000 tonnes of benzene were fixed from the US Gulf Coast to Korea this week, loading in January.

Benzene spot values firmed against upstream crude values the first week of January, as WTI prices dropped by $3.88/bbl in the five-day span. Crude prices hit the lowest levels in 11 years earlier in the week.

The February price premium to January, or contango, disappeared this week as the two months traded at parity. The February contango to January was 1 cent/gal to January prices prior to the Christmas holidays.

January contract values had settled lower prior to the New Year, which follows an increase in the December contract values. The January contract settled at $2.12/gal, which was down by 18 cents from the previuos month. Contract settlements are heavily influenced by values in spot market, which ranged $2.04-2.14/gal FOB (free on board) ahead of the January settlement compared with $2.27-2.34/gal FOB ahead of the December settlement.

Strong demand and lower import levels had pushed spot prices higher in the fourth quarter through mid-December, with demand being led by downstream styrene.

The majority of US benzene is consumed in the styrene sector, which remains tight. Multiple outages earlier in the year combined with strong demand for US exports, alternately from Asia and Europe, have kept styrene inventories low. 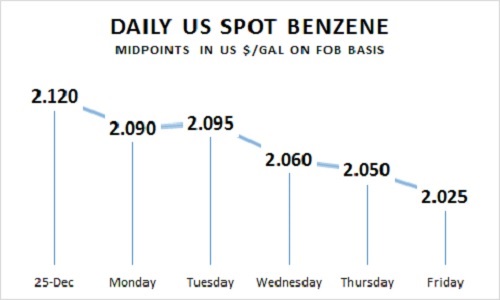