HOUSTON (ICIS)–US spot benzene was assessed wider on Friday with a midpoint steady with last week, despite declines in upstream crude oil values.

Deal values for US benzene have been rangebound in the $1.80s/gal for several weeks, about 30 cents/gal lower than the average benzene spot price during December and the US contract price had dropped nearly 30 cents/gal last week amid the lower spot prices.

US benzene prices late in 2015 had been supported by strong demand and lower import levels during the fourth quarter, with October imports at their lowest monthly level for 2015 and November import levels about at about average levels. 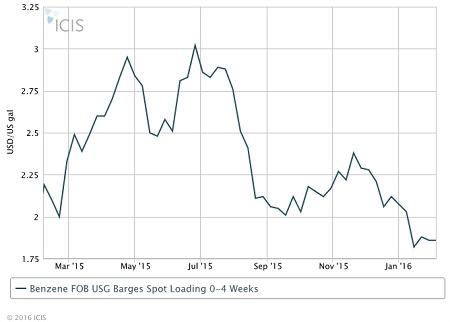