LONDON (ICIS)–European benzene players are watching price developments in the US market, sources said on Tuesday, with cheap transatlantic freight rates and a narrow spread between the two regions potentially opening the arbitrage window.

Spot numbers in the US were bullish last week in tandem with some strength on crude oil and balanced regional availability, with prices initially holding around the $740/tonne level.

Curtailed imports from Asia since earlier in 2016 have also tightened US benzene availability.

There was some downward movement by Friday September 9, however, with regional supply showing signs of improvement.

US spot prices were holding around $710-715/tonne so far this week.

Despite this, several European benzene traders were looking at the arbitrage window into the US last week.

Transatlantic freight rates out of the ARA (Amsterdam-Rotterdam-Antwerp) region were talked as low as $20/tonne for larger parcels, with the US market now shifting to more of an export position. 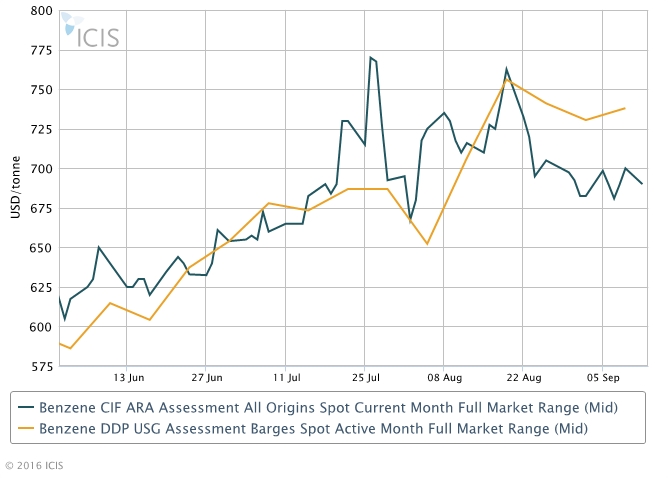 However, some players in Europe were uncertain whether was any profitability in the exercise given the uncertainty on crude oil and the direction of the US market by the fourth quarter.

The widening spread between benzene and toluene in the US is likely to support increased on-purpose benzene production and help rebalance supply in the region by October.

European September benzene bids were at $680-685/tonne on Monday September 12 while offers were at $700/tonne before a deal was eventually done at $690/tonne.