Europe spot benzene moves higher with oil and US gains

After trading at $655-657/tonne CIF (cost, insurance, freight) ARA early last week, spot prices for April dipped as lower crude oil numbers weighed down on the market. A deal for April was done midweek at $640/tonne while May was backwardated, trading at $635/tonne.

Sources said that the downward movement was created by some industry buying interest towards the end of March which pushed prices higher. This subsequently tailed off in April.

There are several styrene turnarounds in April, and a big phenol turnaround in May, which is likely to limit European benzene consumption.

However, the benzene spot market saw a rallying towards the end of last week, with deals done at $657.50/tonne and $660/tonne. Bids for April were later seen at $660-665/tonne with no firm corresponding offers. 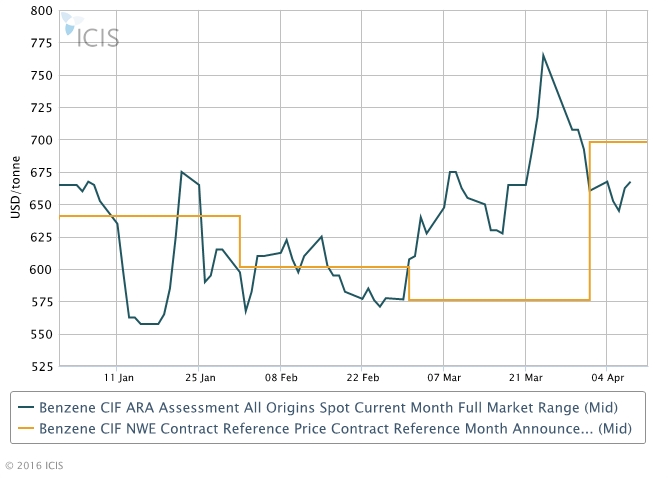 The upward momentum since late last week has largely been driven by gains on crude oil, with Brent moving up sharply after Russia suggested that the 17 April meeting in Doha between OPEC and non-OPEC producers could see an agreement on more than just a production freeze.

This morning saw analysts dispute the idea of any significant curbing of global oversupply, however, with Goldman Sachs forecasting a $35/bbl average for the second quarter of 2016.

There was also an explosion at ExxonMobil’s plant in Baytown, Texas, on Thursday 7 April. The Baytown facility contains the country’s second-largest refinery, with a capacity of 560,500 bbl/day.

It was thought that this would have some upward impact on US benzene pricing, helping pull European numbers higher, although reports indicated that area firefighters had gotten the blaze under control quickly.

One aromatics trader in Europe did not expect to see any major impact on benzene pricing from the Baytown explosion, noting that derivative output at the site has been weaker recently, counteracting any potential tightness.

On Friday 8 April there was a fire at a LyondellBasell subsidiary plant in Texas. A LyondellBasell spokesman told local media that the fire was in a coker unit at the refinery, which produces refined petroleum products, including gasoline, diesel, jet fuel, lubricants and aromatics.

Several European players said that this would have an impact on benzene and toluene availability, supporting higher numbers in the US Gulf this month.

Spot prices in the region picked up towards the end of last week, reaching $2.05-2.12/gal DDP on Friday 8 April, although this was thought to be more the result of higher oil and energy costs.