SINGAPORE (ICIS)–Asia’s import butanediol (BDO) prices were stable-to-soft this week because of the weak buying sentiment and sluggish demand with industry sources expecting bearish market to persist for the rest of the year.

Most suppliers were reluctant to reduce their prices as they were under cost pressure, although buying ideas from end-users fell sharply in line with falling domestic prices.

“We have to reduce our buying ideas because domestic prices continued to fall in the past few weeks. And we could not afford higher prices due to the poor demand and slow sales,” a major China-based buyer said.

Most end-users said they may consider buying import cargoes if import prices fell to a similar level as domestic prices.

“Our PBT business is so bad this year, so we are always running the plants at only half capacity, And I don’t think the demand will improve in the coming months as the year-end is usually the lull season for PBT business,” a PBT producer said.

China’s foreign trade continued to shrink in October, with exports in the month decreasing by 6.9% year on year to $192.4bn and imports down by 18.8% to $130.8bn, China Customs data showed.

Rising supply, coupled with soft demand, exerted downward pressure on the BDO market with the situation unlikely to change in the near future.

The average operating rate of China’s BDO plants was around 42% in the week. 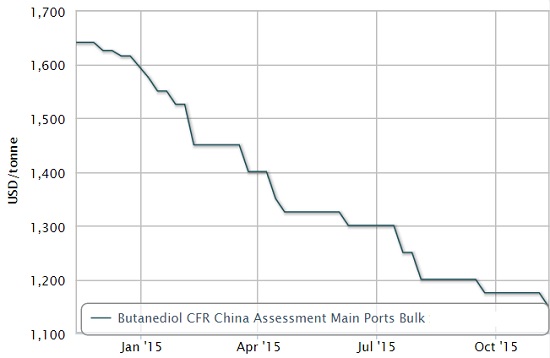