The victims of the fire died of smoke inhalation, Toronto Fire says 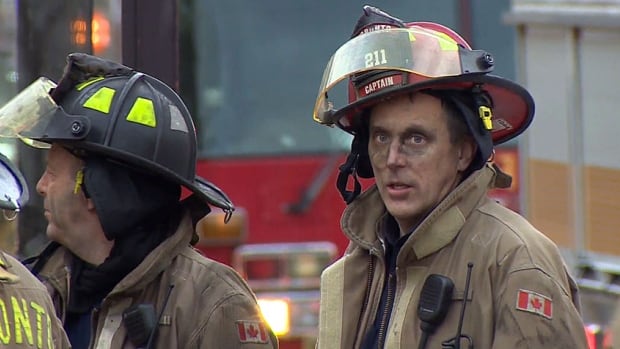 Firefighters battled thick smoke as they rescued seniors from a Toronto Community Housing building. It's unclear what caused the fire that left three people dead. (CBC)

Toronto fire officials say they have pinpointed the source of the smoke that killed three people during a fire earlier this month at a Toronto Community Housing building in Scarborough.

They say the toxic smoke came from two polyurethane chairs that caught fire in a hallway on the fifth floor of the apartment building on Neilson Road near Finch Avenue.

Toronto Fire has charged TCH with having combustible material in a means of egress, a violation of the Ontario Fire Code that comes with a maximum fine of $100,000.

Sales said the cause of the fire at 1315 Neilson Road on Feb. 5 is still under investigation. The building is not a seniors residence but it is predominantly occupied by older tenants.

TCH has indicated it plans to fight the charge, which is not criminal, because it says it was in compliance with fire safety standards.

In addition to the fatalities, 15 people were injured. Some residents were forced to jump out of windows to escape the flames.

Rosario and Jose Magdaong, a married couple, told CBC News on Wednesday they were forced to crawl out a fifth-floor window to escape the fire.

"My husband went to the door and opened the door, and I saw the smoke coming in," Rosario Magdaong said.

"The firefighter put the ladder here and broke the glass. I told the fireman 'I don't like, I don't like,' but they say 'Come, come, come!'"

The Magdaongs have been staying at their son's house ever since the fire on Feb. 5, but on Wednesday they were given the keys to a new unit in the building.

'People are responsible for their own actions'

Jose Magdaong told CBC News smoking in common areas is a problem in the building, and other residents claim cigarettes were the cause of the fire.

But TCH CEO Greg Spearn said the housing agency has a non-smoking policy in its buildings.

"People are responsible for their own actions. It's very hard to control them but we do our very best," he said.

When a resident is in violation of the policy, that person will receive a verbal warning, then a written warning. If the behaviour continues, the resident could face eviction.

Toronto Fire Services says it will increase its fire prevention efforts at TCHC buildings, which includes 200 high-rises and 69 seniors residences.

The plan is to re-educate superintendents, staff and residents and to conduct drills and fire safety inspections at all TCHC buildings by the end of this year.