Some 30,000 employees and 3,200 vehicles were mobilized to collect 22,298 mattresses produced by Daijin Bed Co. on Saturday and Sunday, according to Korea Post.

The problematic mattresses, which are known to emit radon at levels up to 9.3 times the national standard, have been moved to an open-air yard in Dangjin, 120 kilometers south of Seoul.

Being exposed to radon — a colorless, odorless, radioactive gas — for long periods of time can lead to lung cancer, according to the American Cancer Society.

Korea Post had originally planned to collect 24,000 beds, but the rest had either already been picked up by Daijin or could not be moved easily, it said.

None of the workers or cars mobilized for the operation were found to have been exposed to radiation levels above safe levels, Korea Post added. 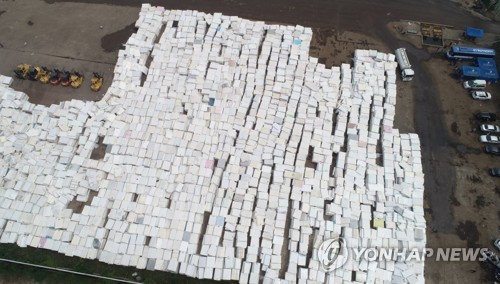 An open-air yard in Dangjin, 120 kilometers south of Seoul, is full of collected mattresses on June 17, 2018. The products sold by Daijin Bed Co. were recently found to release radon, a radioactive gas that can cause lung cancer. (Yonhap)

SEOUL, Sept. 18 (Yonhap) — South Korea’s nuclear safety agency said Tuesday that it has ordered three local companies to recall mattresses and pillows that have been found to emit higher-than-permissible levels of radon gas, a radioactive substance.

The recalls affect Kanuda pillows made by Tni Co. and mattresses made by furniture firm Enex Co. and Sungji Bed, according to the Nuclear Safety and Security Commission.

The agency said Tni is presumed to have sold about 29,000 pillows, and the company has so far recalled about 900.

Radon is a colorless and odorless gas that can be found in nature as an indirect decay product of uranium or thorium. Being exposed to radon for long periods of time can lead to lung cancer, according to the American Cancer Society.

In 2012, Enex sold a total of 244 mattress that are known to emit radon at levels up to 9.7 times the national standard, the agency said. Only five of them have so far been recalled. 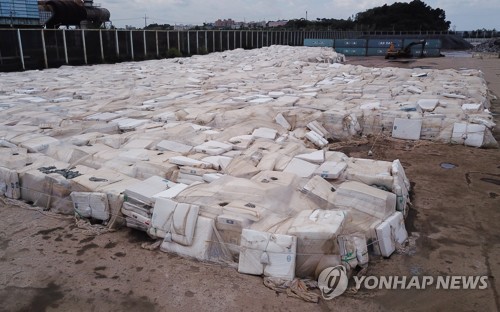 This photo shows an open-air yard in Dangjin, 120 kilometers south of Seoul, full of collected mattresses on Sept. 7, 2018. (Yonhap)