Chemical Prices On The Rise

Numerous markets are finely balanced, and supply restrictions are driving sentiment and volatility at a time of heightened chemical market uncertainty.

Few expect much in the way of chemicals demand growth this year but growth has been, and could remain, steady. And while so much attention, quite rightly, has been given to ethylene and polyethylene (PE) supply/demand dynamics – because of their importance for most cracker operators – we are seeing price fly-ups in other markets as well.

This is a story about products as diverse as methanol, butadiene (BD) and benzene. It is not about an across-the-board increase in the petrochemical industry, but a reflection of reactions in individual markets to circumstances that have heightened nervousness.

That having been said, the increases have been widespread – by product and geographically. They have helped drive the ICIS Petrochemical Index (IPEX) to a level not seen since 2014. 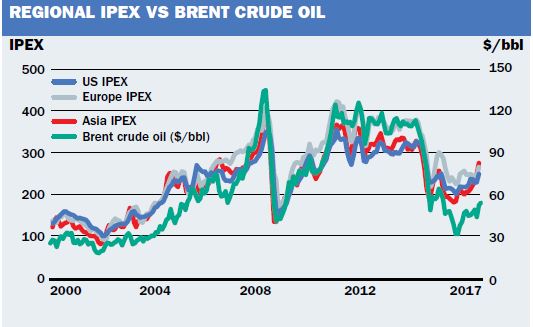 The increases were apparent first in northeast Asia, where markets are predominantly spot-driven and prices formula-based. In the US and northwest Europe, contract prices agreed for January added greater depth to the emerging picture.

The fact that price increases have reverberated around the globe has highlighted the interconnectedness of chemical markets.

The month-to-month and year-on-year increases in January were remarkable. The gains in January were focused on olefins and intermediates and not necessarily on polymers, although a 19% increase in polypropylene (PP) prices was based on a 32% price increase month to month for the monomer.

The propylene increases in the US are based on tighter availability ahead of turnarounds and reduced inventories.

NOW US AND EUROPE LEAD

But generally, the dynamic  of higher prices reverberating around the world has been  apparent with higher month  to month price increases  in northwest Europe and the  US Gulf rather than in north-east Asia.

Methanol prices in northwest Europe, for instance, were up by 45% as a supply crunch affected sentiment. European methanol prices are low compared with the rest of the world, so there is not much room to make imports work.

Global methanol demand has been sustained by markedly higher imports into China. Some 22% of US methanol production capability comes down in April for four weeks when Celanese closes its acetyls complex at Clear Lake, Texas, US for maintenance. Nameplate capacity at the 50/50 joint venture methanol plant with Mitsui is 1.3m tonnes/year.

Meanwhile methanol production in Trinidad is being constrained by a lack of natural gas and there are a couple of other closures globally. Demand from China’s methanol-to-olefins (MTO) players is said to be up.

The increase in BD prices globally is noteworthy, driven by stronger automotive tyre demand in China and a tightness of supply in Asia that has been felt worldwide. Weather-related natural rubber production cuts have pushed natural rubber prices higher and affected synthetic rubber market sentiment.

Butadiene prices in northeast Asia were up 43% in January with prices 30% higher in  the US and up 19% in northwest Europe.

The price trend in northeast Asia has been relentless since early November and was exacerbated last month ahead of the Lunar New Year holidays. Regional traders were snapping up cargoes in the expectation of price increases.

Benzene prices have been skyrocketing too. They were up 29% in northwest Europe in January, up 15.6% on the US Gulf and 11.9% in northeast Asia. Benzene tightness in the US in January pushed prices over $1,000/tonne for the first time since February 2014. Toluene prices were also much higher globally.