US Feb chem shipment values up for 11th straight month

HOUSTON (ICIS)–US chemical shipment values in February rose for the 11th straight month year on year, according to data obtained on Tuesday from the US Department of Commerce.

The value of shipped US-made chemicals rose 5% in February compared with the same month in 2015. 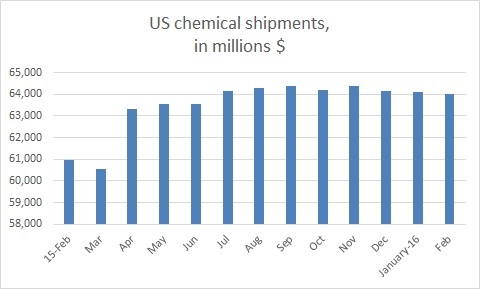 February shipment values for all US manufacturing industries fell about 1%, marking the 15th straight monthly decline.

The US Census Bureau separates chemical shipments into four sectors: pesticides and fertilizers; pharmaceuticals; petrochemicals; and chemicals used in paints, coatings and adhesives.

Petrochemicals declined 5% from February 2015, reflecting the decline in oil prices that brought a drop in derivative values last year.

Chemicals once again ranked as the third largest non-durable goods industry in the US in January, behind transportation equipment at $78.92bn and food products at $65.32bn.

The value of petroleum and coal products, traditionally ahead or even with chemical values but lower now because of plunging crude prices in late 2014 and throughout 2015, totaled $34.81bn in February.

Pesticides and fertilizer values also increased by a solid double-digit percentage – up 60% – reflecting the continued turnaround in the US agricultural sector that followed some years of drought.