Commentary: Is this the turn for chemicals? Tailwinds arise

With fears of a global economic recession running high, 2016 started out rough. The potential triggers were extreme China weakness along with currency devaluation, as well as the US Federal Reserve’s stated intention to hike interest rates four times during the year. Sentiment hit a nadir in early February with financial markets worldwide in turmoil.

The collapse in oil prices also spurred deflationary fears and the potential for mass bankruptcies in the energy space. In the chemical sector, pricing continued to fall off the cliff in lock step with crude.

We’ve come a long way since! And the reversal in sentiment across many fronts is striking. Equity markets worldwide have rebounded strongly from their February lows.

And crude oil has bounced off the bottom – from around $30/bbl (Brent) in late January to about $44/bbl today, with the latest rally spurred by talks of a potential deal between Saudi Arabia and Russia to freeze production, ahead of the OPEC meeting in Doha, Qatar on 17 April.

US petrochemical producers in particular stand to benefit from higher oil prices, as their costs are largely based on low cost natural gas liquids (NGLs), while they sell based on oil-driven prices. These include Dow Chemical, Westlake Chemical and LyondellBasell. 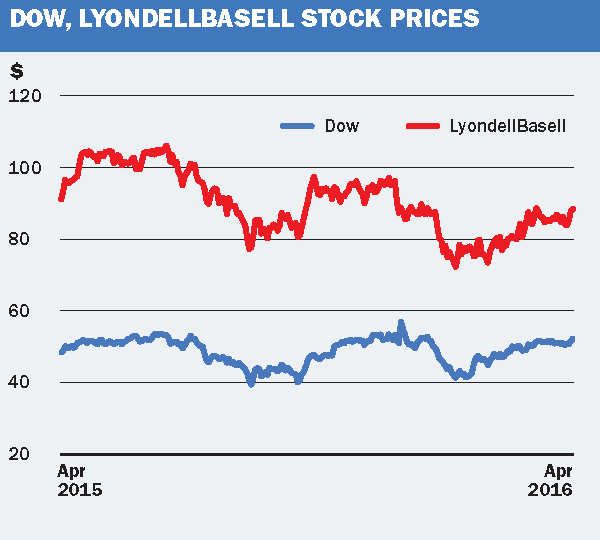 Another tailwind for US-based chemical companies is the weaker US dollar. The US dollar index versus a basket of international currencies is down 5.7% from its high in December 2015. This makes US exports more competitive abroad and also benefits companies through currency translation.

The US PMI registered 51.8 – the first reading above 50 (indicating expansion) in five months, while China’s Caixin manufacturing PMI showed marked improvement, rising close to the neutral mark at 49.7 versus 48.0 in the prior month. China’s official manufacturing PMI actually broke the 50 mark. The eurozone continued to chug along with its latest 51.6 reading, for its 33rd consecutive month of expansion.

The lack of profit warnings from US and Europe chemical companies on the eve of earnings season also bodes well. But any earnings pick-up should be more apparent beyond Q1 if oil prices can sustain higher levels or rise further. Expect Wall Street to ratchet up profit forecasts for US chemical companies for 2016.

Yet not all is coming up roses. The International Monetary Fund (IMF) on 12 April cut its global GDP forecast to 3.2% for 2016 versus 3.4% back in January.

It said in its April report that “uncertainty has increased, and risks of weaker growth scenarios are becoming more tangible. The fragile conjuncture increases the urgency of a broad-based policy response to raise growth and manage vulnerabilities”.

On the latter point, the European Central Bank (ECB) and the Bank of Japan are doing their part with ultra-easy monetary policy, including quantitative easing (QE) involving purchases of debt to lower overall borrowing rates, even taking them into negative territory.

And the US Federal Reserve has backed off its earlier expectation of hiking interest rates four times in 2016. Fed chair Janet Yellen is factoring in global risks to any rate hike decision. One aspect of the debt market may appear running contrary to the scenario of a moderately growing and stable US economy – the historically low benchmark 10-year Treasury yield, which stands at around 1.8%.

A rate this low would normally signal an impending recession. Yet there’s nothing normal about today’s debt market. Yes, the US economic expansion looks to be losing steam, with Dallas Federal Reserve governor Rob Kaplan on 13 April predicting US GDP growth of under 2% in 2016. However, the low US 10-year Treasury rates are also likely a function of even lower rates for competing government debt in Europe and Japan. The US 10-year Treasury yield of 1.8% looks absolutely juicy versus the 10-year German bund’s at 0.08%.

Low interest rates also have kept borrowing costs low for capital intensive chemical companies. For now, the chemical sector is enjoying some stronger tailwinds even amid slower global economic growth. After an inauspicious start to the year, could this be the big turn?