China has relaxed winter anti-pollution measures as – in the midst of a damaging trade war – it prioritises economic growth over the environment.

With the new US tariffs on $200bn in Chinese imports now in place at 10% and likely to rise to 25% on 1 January, China’s economy is starting to feel the pinch.

As we report this week , manufacturing momentum is being lost in China as companies prepare for the impact of the US tariffs. 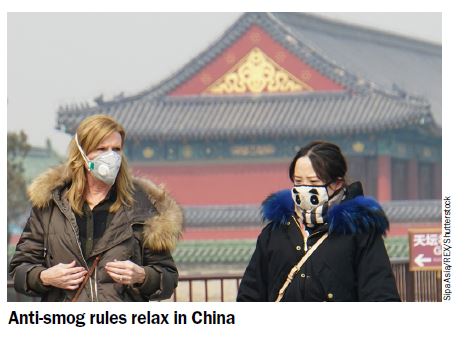 China’s latest official manufacturing purchasing managers’ index (PMI) slipped to an eight-month low of 50.8 in September from 51.3 in the previous month. Meanwhile, the Caixan PMI index fell to 50.0, perilously close to contraction (below 50).

Chinese manufacturers of finished goods for export to the US have been hit particularly hard, and have cut their purchases of raw materials.

For example, US tariffs on finished goods containing polyvinyl chloride (PVC) helped Chinese domestic prices slump by 9% in a week to a nine-month low in late September as demand dropped .

As China’s economy slows, its leaders are relaxing environmental rules in the hope of stimulating growth. The country’s official news agency, Xinhua, reported on 27 September that a target of a 3% year-on-year reduction in average intensity and the number of days with high levels of the particulate PM2.5 would be implemented in Beijing, Tianjin, Hebei and surrounding areas.

The target applies from October 2018 to March 2019 and affects producers of thermal power, steel, petrochemicals and cement.

That is less than the 5% cut proposed in an initial plan seen by the South China Morning Post in August and are well below the cuts of “at least 15%” set out in last year’s plan, the paper says.

It is also far lower than a similar target set back in March 2018 when Chinese Premier Li Keqiang gave a 30% reduction figure for key areas’ average density of PM2.5 for 2018 as a whole.

Also a more flexible approach is called for: “a differentiated approach will be taken, with companies excelling in pollution control being exempt from output restrictions,” says Xinhua.

For chemical companies this could mean that older, smaller, more polluting plants will be targeted, with newer plants being unaffected. There could be fewer closures of plastics processors because of the relaxation of the rules. The closures have been a dampener on prices over the last few months.

According to ICIS consultant John Richardson: “Any benefits in terms of more polymers consumption, though, are expected to be quite limited because offsetting any gain will be the negative effect on the US tariffs on China plastic product imports.”

He believes the looser rules still will not stop the restructuring of the sector because small-scale, inefficient processors – and other manufacturers – will continue to be shut down permanently for economic reasons.

Also the programme to relocate plants away from urban areas to chemical parks is expected to continue.

Last year the environmental inspections and subsequent closures led to an estimated 40% of the country’s total manufacturing capacity being temporarily shuttered, with 80,000 factories charged with breaching emissions targets. Operating rates at chlor-alkali facilities were particularly affected, with operating rates falling to 50-70%.

Under the news rules, blanket bans on the use of coal for domestic heating will not be included this winter. Instead, local authorities will set the targets to match local gas and power generating capabilities. This could improve supplies for chemical production this winter.

Last year an enforced switch from coal to gas led to rationing of natural gas for chemicals production.

According to Richardson: “This explains why methylene diphenyl diisocyanate (MDI) and toluene diisocyanate (TDI) margins went through the roof as plants were shut. So there could be no repeat of last year’s margins and pricing boom in certain sectors.” ■