Benzene prices showed signs of rally both on RMB and USD basis this week. In China domestic market, transaction prices were heard at around 4,930yuan/mt Wednesday. CFR China benzene was heard around $628/mt and $633/mt. Talking level was around 4,950yuan/mt in East China Thursday, up 100yuan/mt from a week ago. Short-term outlook for the market might be not as pessimistic as expected.

China’s May benzene imports were up 40.98% month on month at 159.6kt, data released Wednesday by the China
Customs Statistical Information Center showed. But in June, cargo arrivals are expected to be limited as South Korea-China arbitrage window remains shut recently. Benzene imports for June might fall sharply from May.

CCFGroup’s data showed benzene inventory in East China mainly ports was 63kt, down about 45% from 113.5kt in early this month. 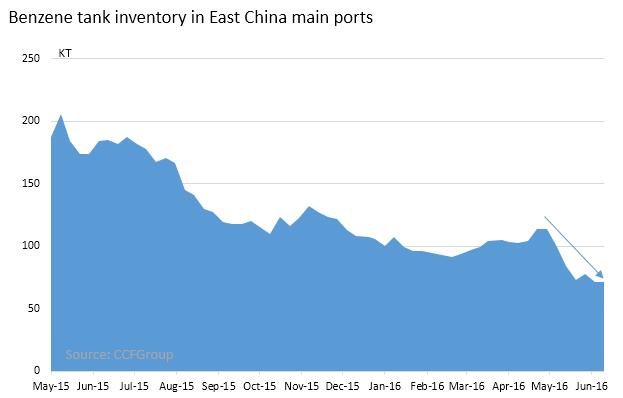 Some suppliers sold for profit-takings as they concerned about supply increase with the end of unit turnaround season in Japan, South Korea and China. Off-take volume increased as a result.

Demand from downstream styrene sector increased. Two new SM plants started recently, with combined capacity of 580kt/year. Changzhou New Solar Chemical (Xinri) has started its 300kt/year SM plant in end May. CNOOC Ningbo Daxie Petrochemical started on Jun 14 and were running smoothly at about 70%. Benzene demand from the two units is around 38kt/month.

Arbitrage window from Asia to U.S. was still shut based on the spot prices, but market participants said the U.S. market would likely to strengthen. In addition, uncertainties about the shutdown of aromatics plants for the G20 Summit remain. Some plants are still working on lowering operating rate instead of fully closing. So demand decline might be smaller than expected.

Given the lower inventory level, increment demand from new SM plants and potential opening of Asian-U.S. arbitrage window, market participants need not worry too much.