SINGAPORE (ICIS)–China’s benzene end users have started to exchange initial ideas of 2017 term prices with their suppliers, with a variety of pricing strategies emerging in early discussions.

Discussions are expected to last until the end of the year and or maybe even slide to the next year if nothing tangible is agreed before that.

Chinese importers feel that domestic market fundamentals should be reflected in the values of benzene imports.

Pricing imported cargoes on a CFR (cost and freight) China basis might be an improvement because they feel that the traditional practice of pricing benzene imports on an FOB (free on board) Korea basis does not reflect enough the dynamics in the China domestic market.

Most end users in China, and some international and regional traders feel that the FOB Korea assessment is heavily influenced by arbitrage flows to the US, which may not necessarily have a significant bearing on the Chinese market.

Some end users in China also say that a CFR China price can better reflect conditions in the import segment due to an increasing flow of cargoes not only from South Korea but from other regions such as southeast Asia, and possibly India.

Other considerations in talks include domestic Sinopec settlement prices in US dollars, and possibly tolling agreements as well in terms of locking in to buy benzene based on CFR China and RMB prices and selling downstream SM based on CFR China prices.

The different price basis that sellers and buyers consider are based on their own outlook on the market, and also premiums or discounts that could be negotiated in the process.

There has yet to be a dominating price basis for the China import market discussion while overall sentiment on prices is stable-to-soft.

Some say that they will wait for Taiwan’s CPC contracts to conclude before exchanging official bids and offers. CPC is a major Taiwanese producer.

However, there were others who think that the indications for both markets should not be linked.

“We don’t think that the China import term price should follow indications from CPC’s term pricing because the increase in new capacities outside of China would have to depend on China downstream expansions to be absorbed, while Taiwan’s demand remains largely unchanged,” said a major Chinese buyer.

The discussion of freight contracts would also be important to influence trade flow and its volumes and term price indications.

“We are expecting cheaper freight rates for voyages next year due to the greater availability of vessels and spot freights in 2016 have been considerably lower compared to COA,” said a Korean producer.

Last week’s discussions were largely subdued as most players were away for a major Styrene Monomer conference in Harbin, China.

Spot market momentum was slow with few offers in the market as there were not many November sellers in the FOB Korea market.

Amid the end year contract negotiations, regional buyers and sellers were careful in their spot negotiations as well, concerned that contract prices might take reference from spot deal done levels, should buying interest push prices up.

December-January swaps were at $1-2/tonne backwardation. 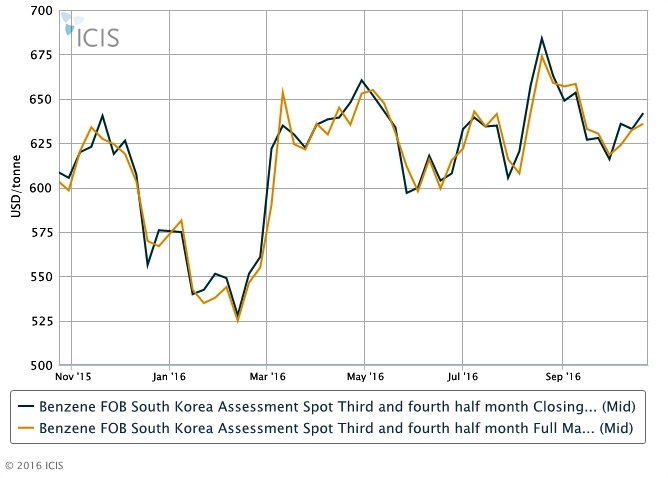