China PO driven up by panic buying ahead of environmental checks

The week previous to that was a short work week due to public holidays in China on 15 and 16 September.

Import prices have spiked by a whopping 61% since the PO uptrend began in early July, reflecting the sharp increase in domestic prices, according to ICIS data

“I haven’t seen such market madness before in my 10 over years in the polyurethane (PU) industry,” a Chinese polyols supplier exclaimed.

Buyers in China scrambled for cargoes as they were apprehensive that cargoes would be in short supply once environment checks on PO plants in Shandong were to commence in either late-September or October.

The checks this time round are believed to be more stringent than usual as it will be conducted by the central bureau and not by the local provincial authorities, market participants in China said.

Several Shandong plants will likely be required to cut their production during this period but the severity of the condition is yet unclear, the participants said.

A Middle East-based plant was shut a couple of weeks ago due to technical trouble at its upstream facilities, while a US plant is due for a shutdown maintenance from end-September to mid-November, market sources said but this could not be independently verified.

Meanwhile, downstream polyols prices in China have also firmed up to achieve near one-year highs as polyols producers try to pass on the cost increase to their main downstream buyers – foam makers.

“Foam makers are in a tight situation right now due to the double whammy not only from the sharp increase in polyols prices but also from [other feedstock] TDI (toluene di-isocyanate) prices,” a Chinese polyols producer said.

Flexible slabstocks grade of polyols, when combined with TDI, find outlets in PU foam for mattresses, furniture and automotive seats. 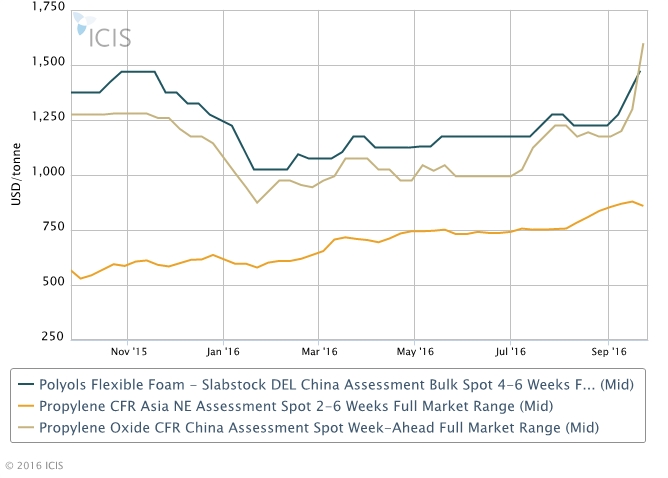