LONDON (ICIS)–European chemicals firms could face the impact of a potential long-term shift in environmental policy by the Chinese government in the event of the failure of recent air purity improvement measures, investment bank UBS said on Monday. 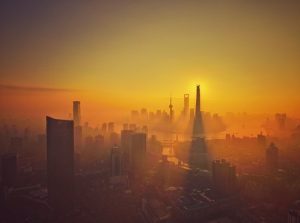 The effectiveness of anti-pollution measures adopted across many of the country’s key industrial cities, aimed at improving air quality, weakened in December, increasing the likelihood that China will adopt more long-term environmental policy initiatives.

The bank’s air quality index for the country showed an average 15% improvement in air purity levels month on month, compared to 22% in November.

Unfavourable conditions prevailed into January, UBS added, with nearly all of the 28 cities profiled in its air quality index readings showing readings in the unhealthy to very unhealthy brackets, and three cities in the hazardous range.

Chemicals producers have faced feedstock shortages as a result of reduced coal production in the country, which has led BASF to declare force majeure on methylene di-phenylene isocyanate (MDI) production in Chongqing in December.

US-based coatings specialist PPG cited the measures as one of the key drivers of raw materials pricing pressure in the fourth quarter of 2017, with company CFO Vince Morales noting “a rolling outage of production curtailment”. 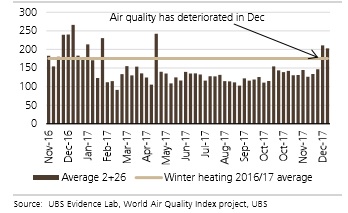 The institution of longer-term measures could bolster producer pricing as reduced utilisation rates tighten supply, but raises the risk of production shutdowns due either to government mandate or lack of raw materials.

Low Asian exports to Europe have already been noted in many European chemicals markets. Triple-digit hikes were agreed in first-quarter European polymethyl methacrylate (PMMA) contract prices last week, as expected supply from Asia failed to enter the market due to production stoppages.

Players in the European maleic anhydride market also noted a lack of supply coming from Asia as a driver for higher pricing.

Longer-term environmental policy measures could also be beneficial for firms producing material for the electric vehicles market, projected to make up 21% of new vehicle purchases in the country by 2025 on the back of lower costs and a fast roll-out of infrastructure across the country, UBS said.

The bank tipped Wacker Chemie as well-positioned to benefit due to its exposure to the polysilicon market, and Umicore for its battery material operations. BASF and Johnson Matthey may also stand to benefit from increased demand for their pollution control technologies, the bank added.