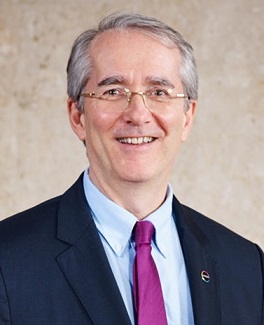 COLOGNE, Germany (ICIS)–Covestro will continue its positive performance in the first half of 2017 although the CEO of the major producer on Monday was more cautious about the second half, as competitors’ plants coming online may slim down the high margins posted in 2016.

Patrick Thomas emphatically said Covestro is far from being a commodity chemicals company, arguing the specialisation of many of its products place it at the forefront of the chemical sector.

The German chemical firm presented its annual results earlier this week, showing net income and earnings jumping from 2015 but the timid guidance for this year prompted investors to sell Covestro’s stock at speed.

Thomas said, however, he does not follow the share price closely, a task he leaves to the company’s CFO, Frank Lutz, he said.

“[In 2016 there were competitors’] projects delayed or got problems [to start up], but our operations work and that’s what counts. The share price is the result of people’s belief or disbelief in a story. Some analysts still see clear upside potential for the share [in their 12-month price target forecast],” said Thomas.

“Those analysts look at the longer-term story. It’s very difficult for people at the moment to understand some of the factors which caused our margins to seem like to peak, there has been a lot said about that, but margins for PU [polyurethanes], for instance, are nowhere near their peak.”

Most analysts, however, expect Covestro’s share price to fall significantly over the next 12 months. Following the annual results’ presentation, Germany’s Baader Bank confirmed its forecast at €41/share, recommending a ‘Sell’ on the stock.Analysts’ notes from JP Morgan Cazenove and Barclays also put the share price significantly lower than its current value, with the former forecasting a 12-month share price target of €45/share and an ‘Underweight’ recommendation, or ‘Sell’ in other banks’ terminology, and the latter placing its forecast at €59/share, with a ‘Neutral’ recommendation.

Thomas, however, defended Covestro’s business as one heading towards specialisation, despite the Coatings, Adhesives and Specialties (CAS) division being the one posting smaller gains in 2016, with adjusted earnings before interest, taxes, depreciation and amortisation (EBITDA) up by only 1.8% to €500m, and mostly on the back of lower raw materials costs.

“We are hardly a commodity chemicals company. We sell PC [polycarbonates] and PU, which in the sector we are in are hugely differentiated. We sell around 600 grades of PC and 1,000 different systems based on MDI [methyl di-p-phenylene isocyanate]. TDI [toluene di-isocyanate] is the only one which is a true commodity [chemical],” said Thomas.

“We have two businesses which are massively resilient, so we have €2.0bn sales in our CAS [Coatings, Adhesives, Specialties division] business which does practically not move at all, it’s solid above 20% EBITDA on average [margin], plus or minus few percentage points, and that has been for the last decade. That’s not a commodity business. Try to find another business in coatings that is that big, even as standalone company.”

Given that PU margins follow the price of propylene, he went on to say, the margin will always be a fixed one. 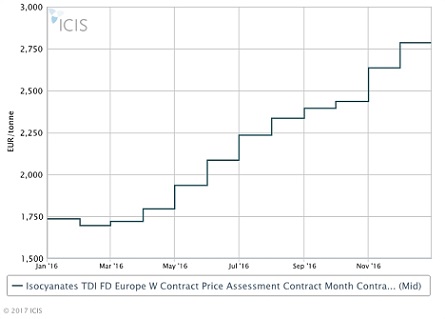 Asked how much Covestro could be affected by other competitors’ plants coming on stream, the CEO reiterated the view he expressed earlier this week, and admitted that prices for products like TDI, which rocketed in 2016 (see graph, as per ICIS pricing data) may come down, although he played down the impact from those competitors’ return to the market.

German chemical major BASF is to bring online its 300,000 tonne/year TDI plants “in a few weeks”, it said earlier this month, with market players bracing for changing prices as a result.

European chemical analysts have also agreed the extraordinary situation experienced in 2016 by Covestro will come to an end and will especially bite the company in the second half of this year.

“Global TDI capacity is about  2.5m tonnes/year, although the product only represents 10% of our revenue,” said Thomas.

“A year ago everybody expected huge growth in TDI capacities, but the only thing that has actually happened is closures – Vencorex closed its 125,000 tonnes/year plant [in France, announced in February 2016] and Japan’s Mitsui closed its [as announced in April 2016].”Moreover, Covestro’s CEO said, capacity growth for TDI globally will stand at minus 6.4%, causing the spike in prices as new expected capacities did not come online.

“Now, you delay that and the growth in 2017 in capacity is 2.8% against the market growing at 4%. Therefore, the supply and demand balance is set to continue to tighten. That is why the first quarter should be better year on year.”

Thomas added had it not been for  Covestro’s own force majeure on TDI and MDI in Europe, declared on 6 October and lifted at the end of the year, sales volumes for the year would have grown more than the 7.5% it finally rose. According to him, the nine-month accumulated growth in sale volumes to 30 September stood at 9.1%.

Whether PU margins have hit their peak, one of the reasons for analysts to be cautious on Covestro for 2017, Thomas said “people have done the maths wrong” and concentrate too much on EBITDA margin on sales, whereas the important feature to take into account would be the raw materials costs.

“It’s very simple: for us, we are not yet at a satisfying level of reinvestment economics on MDI or TDI. Current pricing level is consistent with the raw material level, which is considered with a margin level per tonne which is not at reinvestment levels yet. So we can’t be at peak margins,” he said.

“People have done the maths wrong and you see it everywhere. If you do the maths for EBITDA margin on sales, the sales have been devalued, or deflated, by the crude oil price drop, because the prices we passed on [to customers] have also dropped.”

On the price of raw materials, Thomas did not want to predict how crude oil prices could perform in 2017, although Covestro has made assumptions it will stay at current levels.

However, he also said a drop in prices would not be extraordinary, as stock continue to be plentiful and with the slight increase in prices since December when OPEC and non-OPEC countries to reduce output is at the same time causing producers in more expensive-producing countries, like the US, to return to the markets, adding to the oversupply.

“I mean, structurally there is no reason for the oil price to be where it is. There is plenty of stock in the world. In fact, for a winter season, we have the highest stock we have seen in years. Let’s see. But we don’t worry about that – if raw materials prices increase, we just pass it on [to customers].

“What drives prices for us is supply and demand tightness and utilisation, and that’s what it’s driving profitability at the moment. “

Thomas would not comment on a move widely expected by analysts: when Covestro’s parent company, German chemical major Bayer, will divest the 64% stake it still holds at Covestro, which could be valued at around €10bn at current prices and help finance, at the same time, Bayer’s proposed acquisition of US agrochemicals major Monsanto for $66bn.