Covestro powers ahead, but how long will it last?

Covestro has produced a stellar set of results as it benefits from tight supply and demand in the global polyurethanes (PU) market, conditions which are not likely to persist beyond 2018, however.

The young company has impressed investors since it was spun off from parent Bayer in September 2015. Spin-offs – where a division is legally separated and new shares issued – are popular with shareholders and tend to out-perform both the parent company’s stock and the market in general.

Investors seem to like the management and resource focus that a spin-off gives to businesses which may have been festering or under-performing in the parent group. This was not the case for the former Bayer MaterialScience – previously one of the main divisions of Bayer, but it has gone from strength to strength as an independent entity.

Proceeds from the spin-off are also helping fund Bayer’s own transformation as it raises money for the planned acquisition of Monsanto. Readers may remember that the birthing process did not go too smoothly. The initial public offering took place against a backdrop of stock market turmoil fuelled by concerns about China’s economy and the German diesel scandal.

Bayer was forced to cut the size of the IPO, with the gross proceeds it hoped to gain from the transaction reduced from €2.5bn to €1.5bn. Bayer injected an extra €1bn of its own funds to make up the shortfall. Investors brave enough to take the risk have seen their shares triple in value since then and Bayer has successfully cut its stake below 25%.

This week’s Q3 results were accompanied by the news of a €1.5bn share buyback which may indicate it sees this as a better way to enhance shareholder returns than mergers & acquisitions activity.

As CEO Patrick Thomas points out (see page 26) in an interview with ICIS we publish this week, M&A targets must be at least as profitable as Covestro itself for any deal to make sense.

Thomas is interested in expanding geographical reach as well as bolt-ons which would give access to complementary technologies for its three units PU, polycarbonate (PC) and Coatings, Adhesives, Specialties (CAS). However market dominance would prevent the purchase of a major competitor, at least in PU and PC. 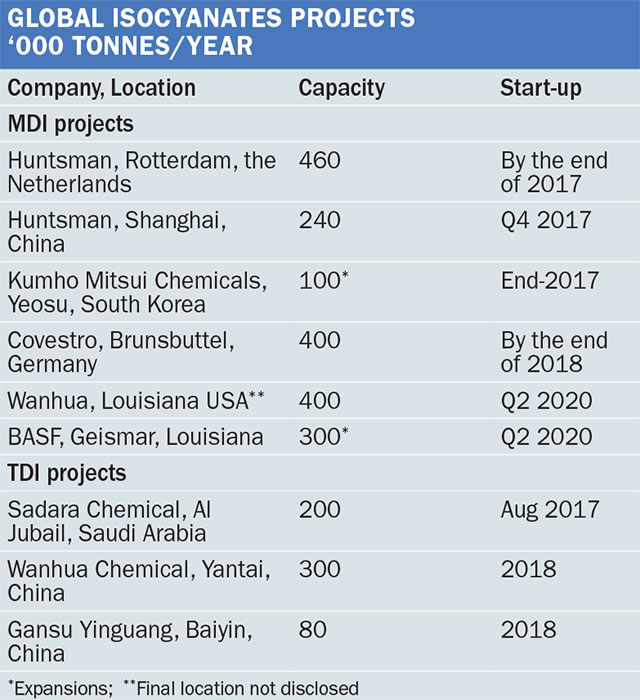 Covestro is number one globally in PU and has almost 30% of the market for PC. Covestro certainly seems to make sense as an integrated industrial entity. Thomas points that its production is based on a common chlorine feedstock backbone.

This gives it economies of scale as well as integration for its own feedstock requirements.

The group is also well-positioned to take advantage of global megatrends such as low carbon transportation and energy-efficient construction.

In the same article CEO-in-waiting Markus Steilemann – who takes over from Thomas in October 2018 – highlights how Covestro’s PC and PU materials can help customers with the development of electric and autonomous vehicles.

The current tight supply/demand conditions for MDI and TDI have been caused by its delicate market balance being disrupted by a plethora of production outages in 2016 and 2017.

As a result prices and spreads have soared for both products. But this looks set to change when a series of projects come onstream with commissioning starting in Q4 2017 and into 2018.

TDI projects are due onstream in the Middle East and China whilst MDI capacities are scheduled for the US, Europe and Asia.

It’s been quite a year for Covestro which was also awarded the 2017 ICIS Company of the Year accolade based on analysis of the financial metrics of all businesses listed in the ICIS Top 100 Chemical Companies.