Shakespeare’s Globe Theatre’s Swan restaurant in London was the perfect setting for a lunch to mark the handover of chief financial officer responsibility from a British executive to his German successor.

It was here that I met the ebullient former Covestro CEO/CFO Patrick Thomas and Thomas Toepfer to discuss the company’s financial management, markets and overall growth strategy.

Toepfer, who took over as CFO in April 2018, steps into the fortunate position of dealing with an excess of positive cashflow from a company which has been enjoying “fly up” margins in its key toluene di-isocyanate (TDI) market. This follows a prolonged outage at competitor BASF’s 300,000 tonne/year Ludwigshafen, Germany, facility which has tightened global markets.

He is also joining a company which is one of the top three producers globally in its main product areas of TDI, polyurethane (PU), polycarbonate (PC) and coatings, adhesives and sealants (CAS). In markets which are already consolidated, this leaves relatively little room for large-scale mergers and acquisitions (M&A) with direct competitors.

Up until now Covestro has chosen not to indulge in major M&A activity, focussing instead on expansions and returning cash to shareholders through share buybacks and dividend increases.

Challenged on whether buybacks are an effective long-term growth driver, Toepfer says: “The paramount thought in our minds is how to create value for shareholders: one option is to invest in new capacity and we spent €500m in 2017 with guidance for up to €650m this year. Share buybacks are another solution are not the only long-term solution.”

Toepfer sees M&A as a viable third option for growth but there has to be a big focus on planning for integration of new assets in a way which brings value to shareholders. “We look left and right for M&A but we are very careful. We have a track record of doing no major M&A over the last 10 years so we must learn to walk and then run before we fly.” He says that because the company has been successful in the last two-to-three years, there is no immediate need to execute M&A.

Toepfer acknowledges that being a market leader raises anti-trust issues for M&A and seems to see most opportunities in the CAS business for smaller add-ons. “In CAS the specialty films business is one among many where we could add smaller businesses.” 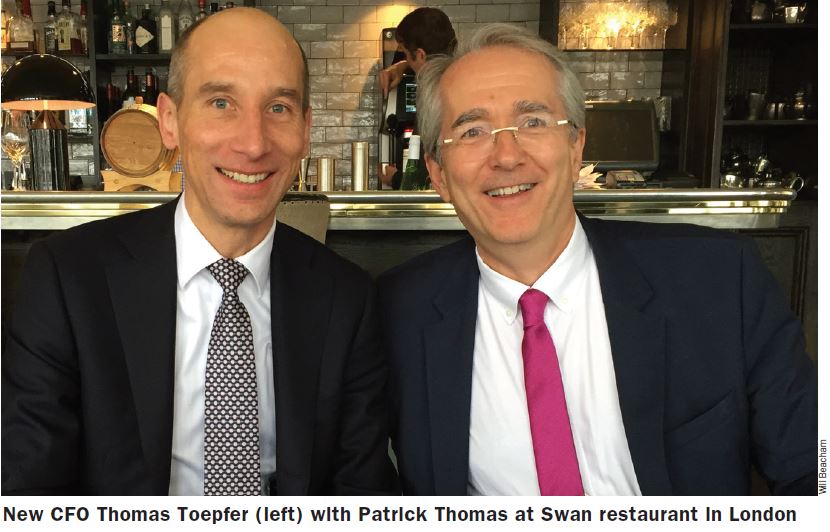 Thomas goes into more detail, explaining how adding specialty manufacturers could allow Covestro to offer a more complete service and handle more parts of the value chain itself.

“This could be companies which produce different components. For example, in security films, we already go quite far down into producing holographic films for special effects for use in passports, ID cards and driving licences. There is already quite a lot of clever technology but other things could be added which are currently done by other, very specialised companies.”

He says some targets could be in quite well-established sectors such as medical dressings where there are multiple players in the supply chain. Post-operative wound care, for example, is becoming very sophisticated. The aging population and more diabetes means the treatment of diabetic ulcers is now a real challenge.

More of the wound care products now have a range of ingredients to create quite a complicated package. Customers are moving towards a packaged device in what has become a very high margin business.

“So far we produce the backing film and adhesives for other companies which then make these complex devices. There are about 12 different steps and functionalities built in. Maybe we could look at taking more of those steps in the supply chain and integrate them. Here integration becomes the value-added step.”

Covestro is currently focused on debottlenecking projects to grow capacity, which Toepfer refers to as “smart capex”. However, Thomas points out that the company will want to add a greenfield MDI expansion at some stage.

“Long-term we have not announced anything. At some stage we will have to expand in MDI but we haven’t decided where or what it would look like. The earliest start-up would now be 2025 if a decision was taken this year.”

Looking at debottlenecking: at the end of 2018 Covestro will complete its 200,000 tonnes/year Brunsbuttel TDI to MDI conversion in northern Germany. At Tarragona, Spain, the company is using its own chlorine technology, which uses 33% less energy than conventional cells, to build a feedstock supply for an MDI plant which is being expanded from 110,000-160,000 tonnes/year.

The final investment decision has been made for this project with a timescale of two to three years for the debottlenecking and three years for the chlorine including all permitting. Thomas says the company is satisfied with existing TDI capacity while CAS – which is relatively low capital intensity, is seeing expansions including an expanded Dormagen dispersants plant. In China hexamethylene diisocyanate has been expanded.

PC is growing in China and from just over 400,000 tonnes now and heading towards 600,000 tonnes/year when it comes onstream over the next three years.

Thomas adds: “We have enough dots on the map from a manufacturing perspective. We have four to five manufacturing sites in India, which is fine. Although growth is very high there, the market is not yet big enough for world-scale plants. I think everything we do over the next seven to eight years will be more brownfield, expanding the sites we already have.”

The global TDI market was relying on the start-up of BASF’s new plant to balance supply and demand, and this has been factored into their investment decisions. The chronic shortage in Europe has been caused by the fact no-one has invested there since 2008 except Covestro and BASF. As demand has steadily increased without extra supply, this gave Covestro a €500m boost in “fly-up” margins in 2017. These will continue to accrue until the BASF restart helps to normalise the market.

BASF expects the plant to restart in the second half of the year. Because TDI is currently so tight, Thomas says that downstream buyers care more about availability than price.

“Even at very high pricing levels it won’t have a material impact on the cost of making a mattress. Every customer I meet wants to seal a supply agreement – they don’t even talk about price because they rely on supply to run their businesses.”

Thomas insists that once the BASF plant is back onstream it will not create over-supply but will bring that market back into balance. “It has been delayed three years, meanwhile the market has been growing at 3-4%/year. This market could have 10-12% of pent up demand growth.”

The market has already absorbed the Sadara facility and in China they are trying to get the smaller and higher-risk sites out of operation, he says. Covestro expects more normal TDI margins in the second half of the year depending on the BASF start-up.

“If you look at TDI over a 20 year period the average return has been better than MDI. It’s intrinsically attractive because there are so few alternatives but it is slightly slower-growing. MDI has higher growth but lower margin across the cycle, says Thomas.

The complexity of the technology is a barrier to entry for potential competitors. Meanwhile Covestro uses its own gas-based production method which reduces energy consumption by 60%.

Covestro is operating its MDI plants flat out at or above 92% capacity utilisation, in a market which is tight and requires more capacity to stay in balance, according to Thomas. “Sadara is onstream and there are lots of announcements of additions but none of them will come onstream for four-to-five years at the earliest. We need one worldscale plant per year to match basic demand growth.”

He says demand growth for the last six months has been higher than everyone expected and there have been some shortages.

“But MDI has more suppliers so it is more balanced with less dramatic swings compared to TDI. I think full year average margins for MDI will be almost identical to last year.”

He says high numbers of force majeure declarations are linked to the fact that plants are running at such high rates in a tight market with little stock.

Covestro’s portfolio is aimed squarely at fast-growing markets which are responding to global megatrends such as low energy transportation, alternative sources of energy and insulation. These, say the executives, are forecast to grow far more quickly than the general economy and GDP. Applications for electric vehicles, wind turbines and in construction are varied and occupy much of the company’s R&D efforts.

Toepfer points out that electric vehicles, for example, contain triple the amount of polycarbonate compared to the conventional market. “And in construction insulation is a super-hot topic where we can provide the solutions.”

Thomas adds that although construction may be growing at 2%, the insulation segment is growing at 3-3.5% and within that PU is growing at 6% because it is so much better than the alternatives. “That’s why we enjoy growth above others in the construction sector.”

The CAS business is slightly slower-growing because it is slightly more dependent on packaging adhesives, paint, and coatings of offshore marine equipment and other areas which are more GDP-related with less substitution effect. However the feedstock integration it enjoys means it achieves above 20% EBITDA margin throughout the cycle.

As CFO Toepfer wants to build, slowly but surely, Covestro’s M&A capabilities. He also wants to make sure the company stays focused on creating value through investments.

“Yes we have a smart capex approach but eventually we will have to decide on a larger capex project. What is that? When is that? Where would it be? We have to make the right capital allocation decisions.”

In the meantime – if no investments – he has to work out how to return value to shareholders. “The share buyback is one option and we are in the second phase of it. Some German shareholders prefer dividends but we’ve decided on buybacks because the Anglo-Saxon shareholders mostly prefer this. We have also increased our dividend.”

Toepfer’s last role was with a spin-off from Linde and there is a similar story with an IPO, though this was followed by a significant acquisition. “This journey of turning a former corporate division into a completely self-sustaining world-class company will be my key focus together with [new CEO from 1 June] Markus Steilemann.”

The chemical industry has been embracing digitisation for years in terms of predictive maintenance, automating production and getting online production data. The next wave, says Toepfer, relates to marketing and finding new channels to customers.

Covestro has a goal to generate €1bn of turnover through new digital channels. In April it signed up with the Alibaba e-commerce site in China as a new channel to market for its products.

“We have a dedicated team with quite a sizeable budget working on these platforms and new routes to market. We will work with other players to create marketplaces for specific products. It does not have to include direct competitors but history teaches us it is better to open up to allied products and services,” according to Toepfer.

Asked whether selling direct to smaller customers will create competition with the distribution channel, Thomas says: “Distributors have been losing business for years in China. When we first started in coatings in China everything was sold via distributors because we just didn’t know who the customers were. Steadily we have found our own channels to market so we are no strangers to changing our channels to market away from distribution.”

He points out that other sectors such as electronic components have already switched away from distributors to direct sales thanks to the power of new channels such as Alibaba.

“In many start-up markets to begin with distributors control the market because of language and knowledge [barriers]. Alibaba has shown how things can change. It’s a logical progression – it’s not about upsetting distributors, it’s about finding another channel.”