LONDON (ICIS)–Covestro has raised its guidance for 2018 above the banner levels of 2017 after posting gains across businesses for the second quarter of the year, despite signs that bumper margins for some polyurethanes products are beginning to normalise, the company said on Thursday. 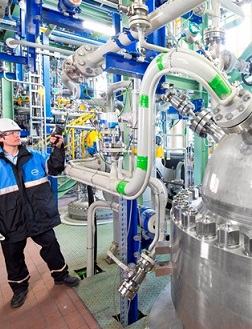 The Germany-headquartered plastics, foams and specialties producer is projecting full-year earnings before interest, taxes, depreciation and amortisation (EBITDA) above 2017 levels.

Runaway profit margins for toluene di-isocyanate (TDI) and methyl di-p-phenylene isocyanate (MDI) beginning in 2017 drove a 70.6% year on year increase in EBITDA for the year to €3.4bn, a figure Covestro said it is likely to exceed in 2018 on the strength of results for the first six months.

Free operating cashflow is also likely to exceed the €1.8bn generated in 2017, creating a war chest of cash that the company put to work initiating a €1.5bn share buy-back, the second tranche of which launched during the second quarter.

So far, €800m in shares representing around 5% of Covestro’s issued stock have been repurchased, with the programme likely to be wound up by mid-2019. Return on capital employed is also likely to be stronger this year, the company added.

The cash reserves generated last year will also help to fund a strengthened investment programme of €650m-700m this year, of which €300m has been earmarked for an expansion in global film production and the upgrade of facilities at its Tarragona, Spain, methyl di-p-phenylene isocyanate (MDI) complex.

Aside from capacity expansions for MDI in Brunsbuttel, Germany, and polycarbonates (PC) in Caojing, China, the company did not set out plans for the remainder of the cash it expects to put to work this year.

Acquisition opportunities are limited for the company in its core markets beyond bolt-on deals for its more fragmented coatings, adhesives and specialties (CAS) business, according to former CEO Patrick Thomas.

“What else can we do? We can’t buy a PU player because of anti-trust issues, we can’t buy a polycarbonates player, because we’re the world number one. We can’t go out and buy anything of substance,” he said, speaking to ICIS earlier this year.

“We can do some things in CAS, but the very nature of CAS is that it is made up of… 2,500 different products, so if you’re going to buy something in CAS, typically it’s at the €50m-100m bolt-on scale, and it has got to be value-creating,” he added.

However, the expecting cooling for polyurethanes margins as rival BASF finally resumes production at its beleaguered flagship 300,000 tonne/year TDI unit in Ludwigshafen, Germany, Covestro is looking to reduce the exposure of its business to demand cycles.

“Our goal is therefore to reduce the cyclicality of our product portfolio even further and to continue our successful development,” said CFO Thomas Toepfer.

This is to be achieved through developing new applications in the automotive, electronic and healthcare sectors, he added.

The company reported a 25% increase in net profit for the second quarter of the year on Thursday to €604m on the back of higher selling prices and increased demand.

PC division earnings before interest and taxes (EBIT) grew 59% over the period to €241m driven by Asia Pacific sales and stronger pricing, while improved sales drove an 8.4% increase in polyurethanes EBIT to €492m.

Covestro’s shares were trading higher following the financial results publication. By 11:00 London time, the stock was up 2% compared to the latest close to €81.76 per share.