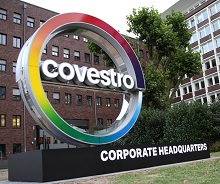 LONDON (ICIS)–Covestro’s first-quarter net profit surged to €468m, compared with €182m in the same period last year, as earnings from its polyurethanes segment more than tripled, the German producer said on Tuesday.

Operating profit for the March quarter stood at €688m, more than double the €340m profit recorded in the same period last year, it said.

Polyurethanes’ operating profit in the first three months of the year soared to €396m from €117m in the previous corresponding period, with sales up 35% year on year at €1.89bn.

Covestro said overall sales volumes and selling prices rose in the first quarter, up 9% and 13.4% year on year, with prices for polyurethanes rising by 25.8%, all factors facilitating the 24.7% rise in sales compared to the first quarter of 2016.

“Our optimism for fiscal year 2017 was confirmed in the first quarter,” said the company’s CFO Frank Lutz, with Covestro stating the good performance was due to greater demand from the “global construction sector” as well as from the furniture and mattress industries in North America and Asia/Pacific.

The German producer attributed to these healthy market conditions its decision to maintain production of methyl di-p-phenylene isocyanate (MDI) in Tarragona, Spain, reverting its 2015 announcement of permanent closure.

“At the same time, Covestro is working on converting a plant in the Northern German town of Brunsbuttel [as announced in June 2016]. The company expects to double MDI production capacity there to approximately 400,000 tonnes[/year] in the course of 2018,” it said.

Covestro said the start of the year gave it confidence to maintain its sales and earnings targets for the year and rise its forecast for free cash flow which for the year 2017 as a whole would come “significantly above” the average of the last three years, although it did not anticipate on Tuesday any concrete figures.