(CNN)A massive chemical fire that filled the sky with smoke and flames for days in southeast Texas has finally been snuffed out. But its effects could still be dangerous.

The city of Deer Park announced a shelter-in-place order Thursday morning due to concerns about “levels of benzene or other volatile organic compounds (VOCs) within city limits.” 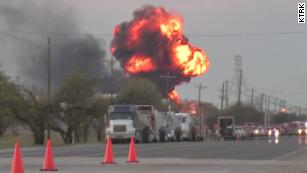 A huge fire at a chemical plant is out, 4 days after it started
At least six area school districts have canceled classes Thursday, a day after the flames were extinguished.
The Intercontinental Terminals Company said increased levels of benzene were detected early Thursday.
“These levels are below those that represent an immediate risk,” ITC said.
“We have notified the surrounding municipalities, and out of an abundance of caution, Deer Park Emergency Operations Center has called for shelter in place precautions immediately for all of Deer Park.”
Acute exposure to benzene can cause headaches, dizziness or loss of consciousness, the World Health Organization says. Chronic exposure can lead to cancer.
ITC said responders “are working actively to reduce the cause that may be responsible for the elevated readings” of benzene.
The fire burned over four days at an ITC petrochemical plant in suburban Houston. It was finally extinguished Wednesday.
It began in a single tank Sunday afternoon and quickly spread to a second tank, the company said.
By Tuesday, seven tanks were burning. The tanks contained chemicals that go into making gasoline, including xylene, naptha and pyrolysis gasoline, known as Pygas.
No serious injuries have been reported. The cause of the blaze is still under investigation.
https://www.cnn.com/2019/03/21/us/texas-deer-park-chemical-fire-thursday/
« Previous Post Next Post »