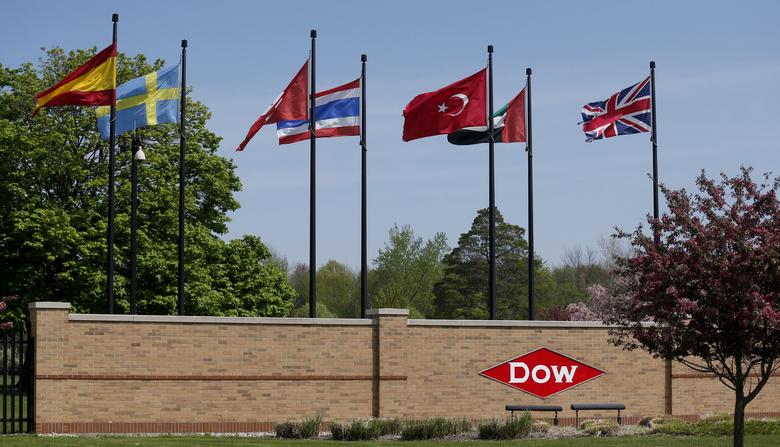 FILE PHOTO: The Dow logo is seen at the entrance to Dow Chemical headquarters in Midland, Michigan May 14, 2015. REUTERS/Rebecca Cook/File Photo
By Swetha Gopinath

Dow Chemical Co (DOW.N) reported a bigger-than-expected quarterly profit as the seeds and chemical maker benefited from its consumer-markets focus, and said it has had “substantive discussions” with regulators over its merger with DuPont (DD.N).

Dow Chemical’s shares were up 1.4 percent in light premarket trading on Thursday.

The $130-billion Dow-Dupont merger was approved by EU antitrust regulators last month on the condition the companies divest assets and research and development facilities to address competition concerns.

The merger is still to be approved by regulators in the United States, Brazil, China, Australia and Canada.

“We’ve had lots of substantive discussions, expect to hear from China and the U.S. Department of Justice next, followed by Brazil,” Howard Ungerleider, Dow’s chief financial officer, told Reuters.

“I won’t rule out additional remedy, there are likely to be some smaller remedies until we get final approval from authorities around the world,” he said, referring to asset sales required to secure regulatory clearances.

DuPont said on Tuesday it continued to expect the deal to close in August, after repeated delays.

The company said on Thursday sales rose in four of its five businesses in the first quarter ended March 31, falling only in its agriculture unit.

Sales in Dow’s agriculture business slipped 5 percent to $1.6 billion on lower sales of herbicides and insecticides in Asia Pacific and weak demand for corn seeds in North America.

Dow’s agriculture business is far more reliant on crop protection products, which make up 75-80 percent of the unit’s sales.

DuPont reported on Tuesday a better-than-expected quarterly profit on robust seed sales, but warned that weak demand for corn seeds would weigh on its current-quarter profit.

A shift to the more-profitable soybean among U.S. farmers is hurting demand for corn seeds.

Dow reported an operating profit of $1.04 per share in the quarter, topping the analysts’ average estimate of 99 cents per share, according to Thomson Reuters I/B/E/S.

Dow has been concentrating on high-margin businesses after shedding its less-lucrative commodity units, including parts of its century-old chlorine business.