Polyols, toluene diisocyanate (TDI), crude methylene diphenyl diisocyanate (MDI) and pure MDI April contracts were assessed with up to triple-digit discounts in some cases as demand has largely evaporated and most foam producers are currently closed. The industry anticipates upstream feedstocks to come under further pressure following dramatic declines in crude oil prices. 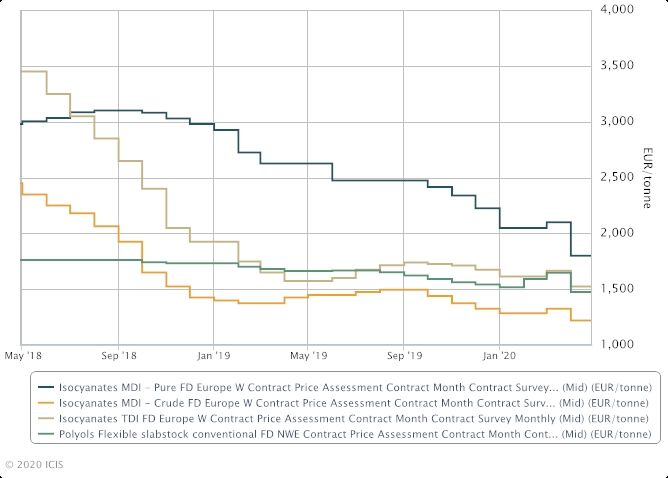 “No one is buying anything,” a Europe-based isocyanates and polyols reseller said.

While there has been discussion of lockdowns being lifted and factories restarting, it is unclear how long it will take for the PU markets to normalise, and the outlook for May remains clouded.

CRUDE MDI
The April crude or polymeric MDI (PMDI) contract range was assessed at €1,150-1,290/tonne FD (free delivered ) W (west) Europe – a new record low – having decreased €140/tonne at the lower end and €70/tonne at the upper end of the range. 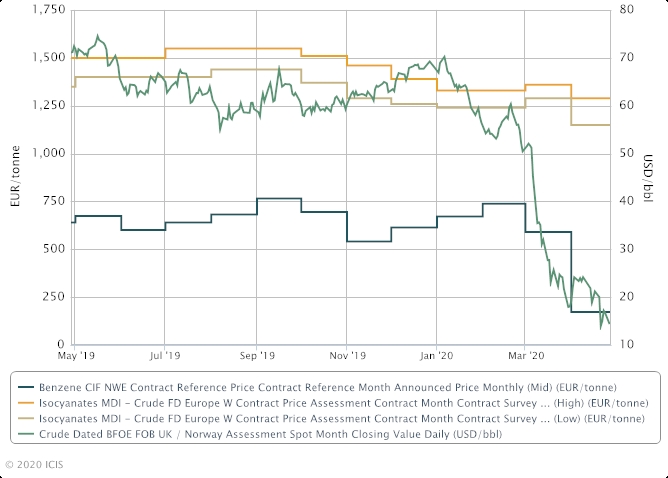 While rollovers were seen in some cases earlier in the month, absolute prices quoted indicated significant declines amid widespread automotive plant closures and construction demand grinding to a standstill in some areas. The closures have resulted in a large amount of order cancellations and postponements this month, and in some cases producers are holding inventory for customers.

“No one is going to the market,” a Europe-based isocyanates distributor said. “People are now only buying what they need. They don’t intend to have high stock levels.”

Most of the region’s MDI producers are now running at minimum operating rates, and although some factory restarts have been discussed the market is expected to face continuing downward pressure in May, particularly as imports from China and South Korea are expected.

“Everything is moving so slowly nowadays,” a Europe-based isocyanates reseller said. 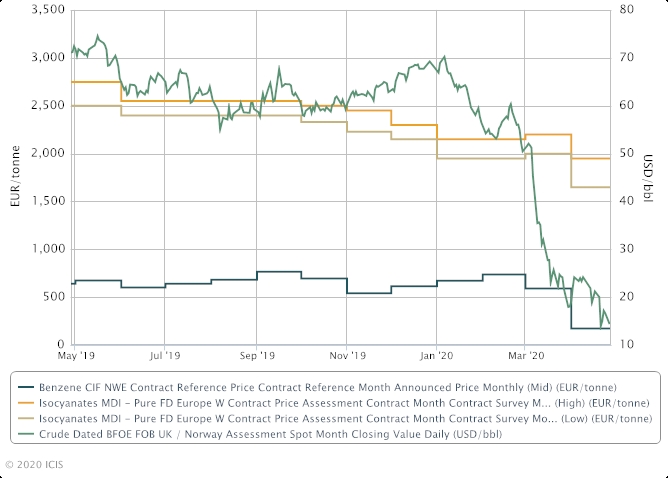 Rollovers, double-digit increases and discounts were heard earlier in the month, in some cases on deals negotiated before feedstock prices plummeted. However, absolute price levels quoted for pure MDI reflected much larger declines.

“Most customers stopped placing orders for MMDI,” an Asia-based exporter of isocyanates to Europe said. “This has pushed prices downward dramatically.”

Demand for pure or monomeric MDI (MMDI) in key markets such as Italy and Turkey has collapsed with lockdowns and precautions linked to the coronavirus forcing footwear and automotive factories across the region to halt production.

The MMDI market has also faced heightened buy-side caution due to its relatively short shelf life. There was an unconfirmed report of a production issue affecting output at the Borsodchem plant in Kazincbarcika, Hungary. Most producers are believed to have minimised output.

TDI
The April TDI contract price range was assessed at €1,450-1,600/tonne FD W Europe, having decreased €170/tonne at the lower end and €110/tonne at the upper end of the range, and sliding to the lowest level since September 2005. 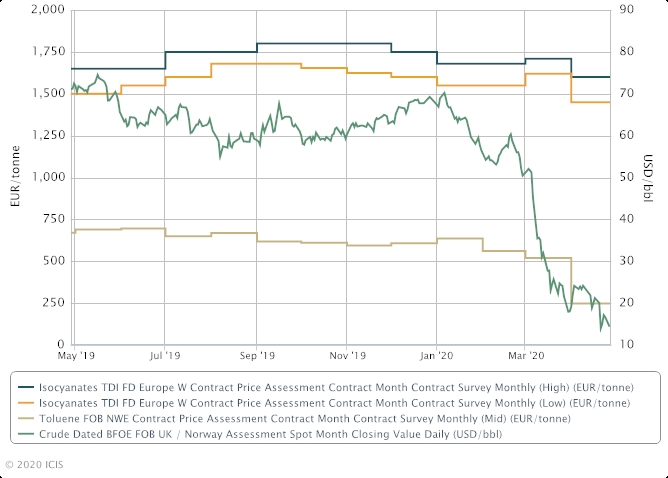 In some cases rollovers were heard, but absolute price levels that were quoted indicated much larger declines.

“All the [foam producers] are still down – there were no restarts this week and shops are closed, malls are closed [and] auto industries are down,” a Europe based isocyanates producer said.

The closures have resulted in a large numbers of order cancellations and postponements, particularly as some buyers had filled inventories in late March amid concerns over supply security.

“In many cases the initial estimates and commitments – we had to face the reality that it had changed completely,” the producer added. “Nobody could tell us how much volume they wanted, and some customers wanted zero.”

Small amounts of PU products are going to into the healthcare sector, including bedding for hospitals.

While BASF permanently closed its Schwarzheide, Germany, TDI plant at the end of March, there is no shortage of material as the region’s producers are all believed to have minimised output.

The industry is awaiting fresh news on when lockdowns will be lifted, but the outlook remains clouded and demand is expected to remain depressed well into May.

“We’re all tired of this bad situation,” a Europe-based TDI and polyols buyer said. “We sell only for small customers in small quantities [and] only one day a week.”

“If the situation remains the same for May, I think I will buy nothing.”

POLYOLS
The April polyols contract range was assessed at €1,400-1,550/tonne FD NW (northwest) Europe, having decreased €200/tonne at the lower end and €145/tonne at the upper end of the range. Prices are now at their lowest level since February 2010. 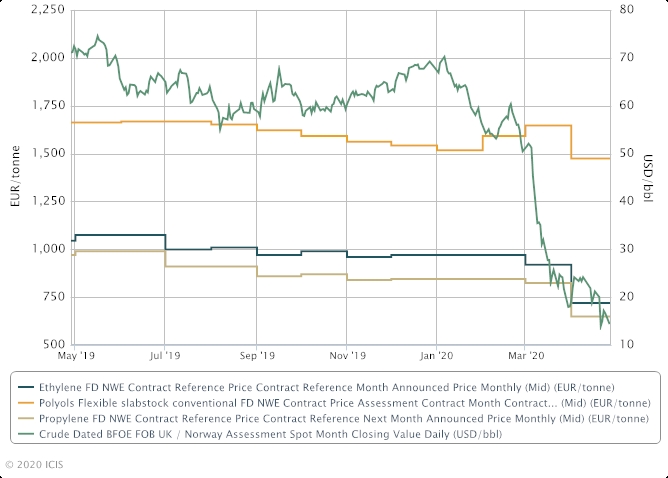 In some cases rollovers were heard, but the bulk of feedback and absolute price levels that were quoted indicated significantly larger declines.

Bedding and furnishing shops and automotive plants remain closed across the region and most flexible foam producers are closed as a result. These closures have led to a large numbers of order cancellations and postponements this month, particularly as some buyers had filled inventories in March.

“There were quite significant cancellations in April after people had stocked up thinking they would encounter logistics problems,” a Europe based producer of polyols said.

Small amounts of PU products are going to into the healthcare sector, including bedding for hospitals.

The industry is awaiting fresh news on when lockdowns will be lifted, but the outlook remains clouded and demand is expected to remain depressed well into May.

While supply has been reduced from most polyols producers, slow demand and tumbling crude oil prices are expected to maintain downward pressure on the market.

“Of course, our stocks are building up, but we’ll see,” a Europe-based polyols producer said. “We’ll be ready for an economic recovery.”

MDI is consumed mainly in polyurethane foams, which account for about 80% of global consumption. Rigid foams, the largest outlet for MDI, are used mostly in construction, refrigeration, packaging and insulation. MDI is also used to make binders, elastomers, adhesives, sealants, coatings and fibres.

TDI is mainly used for the production of PU flexible foams used in upholstery, mattresses and automotive seats.

Polyols are often reacted with isocyanates to make PU, which are used to make mattresses, foam insulation for appliances (refrigerators and freezers), home and automotive seats, elastomeric shoe soles, fibres and adhesives.