LONDON (ICIS)–Saturated supply and slow demand are anticipated to prevail in Europe’s polyurethanes (PUs) feedstocks into the early months of 2020, with only thin signals to indicate a break from external pressures that hammered the petrochemicals industry in 2019.

Like other petrochemicals, prices of isocyanates and polyols have crumbled in the face of slipping macroeconomic factors and the ongoing trade tensions between the US and China that have overshadowed global markets throughout 2019. 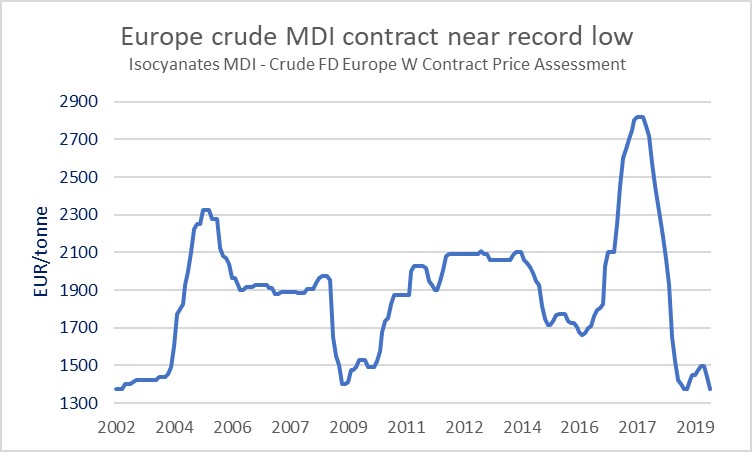 –
Near the end of the fourth quarter, prices of crude methylene diphenyl diisocyanate (MDI), a feedstock for rigid PU foam used in construction and insulation, were a notch above the lowest prices ICIS has on record since beginning coverage in 2002. 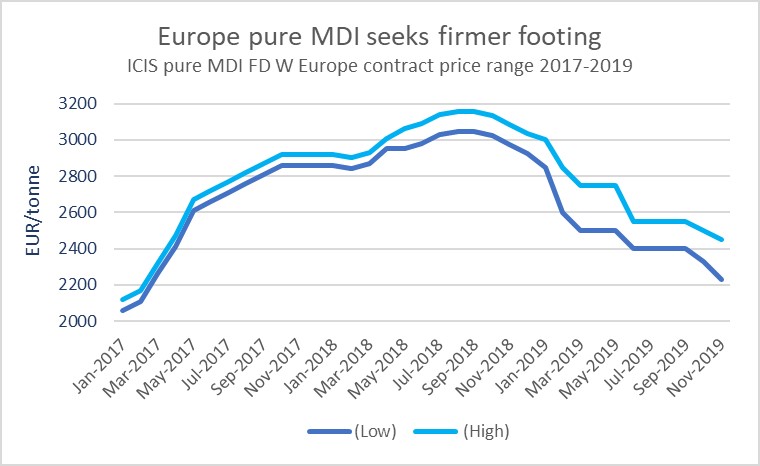 –
Its isocyanate twin, pure MDI – a feedstock for PU foam used in footwear among other applications – has fared slightly better, although prices have been on a consistent downtrend since October 2018 and are at two-and-a-half-year low. 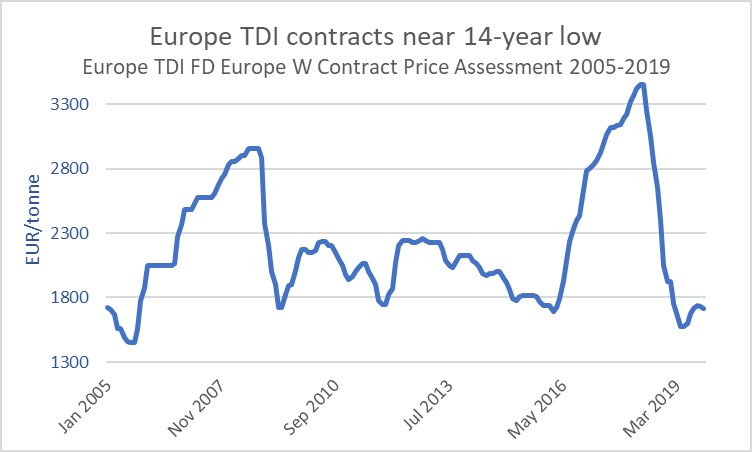 –
Equally bad, cousin toluene diisocyanate (TDI), which is used in flexible foams for bedding and furniture, has seen prices tumble to less than half what they were in May 2018 when they hit a 14-year low. 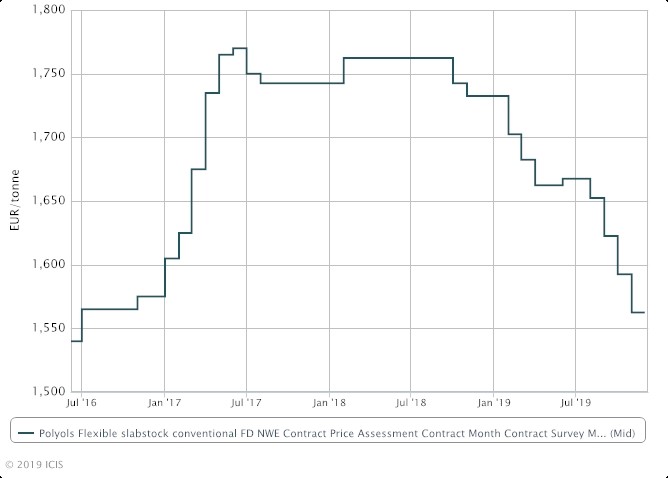 –
In the meantime, their partners – polyols – the compounds that react with isocyanates to produce and determine the properties of PU polymers, were at a more-than-three-year low.

“I’ve never seen such big reductions on a monthly basis,” one reseller said, referring to the discounts on crude MDI prices in November.

NOT BUYING
The current depressed levels of isocyanates and polyols prices could spur buying interest, but several market participants interviewed by ICIS said they did not expect demand to improve in the near term.

“People are not buying things. Watching Trump and China and upheaval all over the world, people are withholding purchases of consumer goods,” a Europe-based reseller said.

Buyers were holding out for further discounts on feedstocks and had postponed orders for 2020 that would normally begin in Q4, another producer added.

Prices for MDI used in rigid foams and CASE applications – coatings polyurethanes, adhesives, sealants and encapsulants – have declined as a result of increased competition and slower demand from the automotive sector, which has been falling since the second half of 2018.

“The CASE industry is oversupplied – approached by everybody. The manufacturers – the major suppliers are ruining the market, offering cheaper product,” a Europe-based distributor said.

“People spend less on everything: cars, consumable products. It will keep [going] like this,” he added.

Crude MDI found some support in the construction sector in the second half of 2019, although demand had begun to drop off seasonally by November.

SOFTER
Demand for mattresses, a major outlet for TDI used to make flexible foams, has softened along with gloomy macroeconomic conditions. Earlier this month, the European Commission, for example, cut its GDP growth forecast for the eurozone to a lacklustre 1.1% for 2020.

Overall demand for TDI is stable but is not expected to improve into early 2020, as many foam producers have reduced their intake of raw materials.

There was some support earlier this year in the TDI market surrounding a turnaround at BASF’s flagship Ludwigshafen plant, but that outage appeared to cause no reduction to supply.

There were unconfirmed reports of imported material being used to supplement any reduction in output from the plant.

Ludwigshafen’s autumn 2019 turnaround was the latest in a string of closures. The facility was taken offline originally in November 2016, due to a damaged reactor, before it was brought back online in May 2017. However, further work was carried out in 2018 and this year.

GLOBAL GLUT
This phenomenon is, however, not limited to Europe. According to ICIS aromatics consultant Rob Peacock, investments into new facilities over the past few years, coupled with weak isocyanates demand in 2019 have left the isocyanates industry in a position of some structural oversupply, particularly in TDI.

“For TDI, although no further significant expansions are planned post 2020, we still expect the market to be structurally long for the next few years, without any rationalisation,” Peacock said.

Faster growth has been seen in the MDI markets than in the TDI markets in recent years, but weak demand in late 2018 and 2019 resulted in oversupply following recent expansions.

“If softer than expected demand continues further into 2020, then we expect that some previously announced expansions will be delayed,” he added.

Average operating rates are expected to be higher for MDI than for TDI in the next couple of years, when MDI capacity is forecast to hit 9m tonnes/year in 2020, outweighing demand by around 2m tonnes.