LONDON (ICIS)–Ethylene and propylene demand remains rather mixed depending on derivative and application and the outlook is still certainly unpredictable but, on a short-term basis, there have been some shifts in spot prices.

ETHYLENE FIRMS AS MARKET BALANCES
Ethylene has moved from an extremely lengthy supply position – lowest pricing point in April and H1 May – into a much more balanced scenario.

A fire at Borealis’ Stenungsund, Sweden cracker on 11 May and its subsequent ongoing outage, together with unplanned issues at the Priolo and Brindisi crackers in the Mediterranean, changed the fortunes of those ethylene sellers constantly under pressure to manage their balances.

The uptrend in crude oil and naphtha through May which led to the €60/tonne increase in the ethyelene June contract reference price has continued, in turn underpinning sellers’ price ideas.

Some players have described the market as short at least for prompt tonnes, others disagree but admit that the unsolicited, frequent calls and offers from sellers, so common just a few short weeks ago, have disappeared.

Sellers may be being a little more cautious in releasing tonnes given the ongoing supply constraints caused by the unplanned production issues as well as some cutbacks to operating rates where C4s/butadiene (BD) offtake is a problem.

Subsequent offers have been heard around June contract price minus 20% but no deals so far heard concluded at that level. 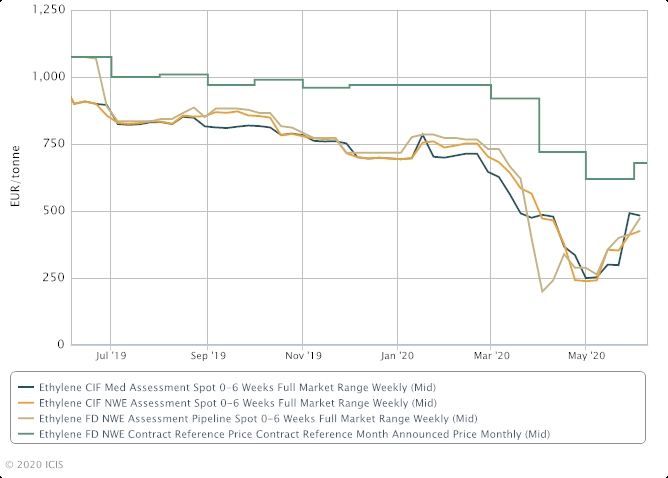 –
PROPYLENE: NOT THERE YET
Propylene meanwhile appears to be moving in the opposite direction.

Firming fundamentals on the back of strong demand from polypropylene (PP) and derivatives like isopropanol (IPA), together with reduced refinery output, commanded spot price percentage discounts in single-digit territory, but now discounts have slowly but steadily deepened.

Low derivative operating rates as non-polymer players run down high inventory levels amid limited export opportunities are weighing on the market, just as refinery output starts to be ramped up again.

In addition to this, the Antwerp, Belgium propane dehydrogenation (PDH) unit has been back online since H2 May after maintenance that began in late January.

May polymer grade propylene was widely traded at contract price minus 11% delivered.

Discounts of 12-13% are now more apparent for June volumes, and sources said there are offers around minus 15% too, but this is not widespread. 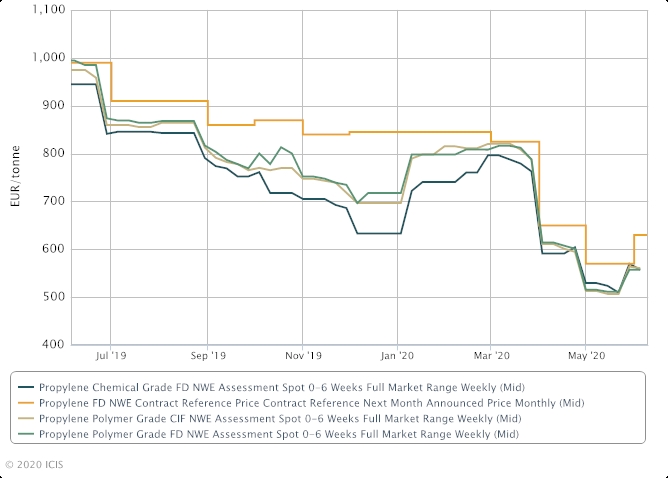 –
Deep-sea activities have been rather thin on the ground lately; there is limited interest to import volumes but there has been talk of one or two cargoes – ethylene and propylene – having been fixed to load this month and head out to Asia; details have not been confirmed.

Looking forward, the summer is approaching and the question is whether downstream demand will slow again in line with the traditional summer dip.

“It will depend on whether we have recovered enough to be able to see a dip,” a propylene derivatives producer said.

Everyone is trying to figure this out.

Currently, players are assuming that having had so much downtime and/or reductions for the last three months, most will be eager to run through even if at lower-than-hoped operating rates.

However, much will ultimately depend on consumer confidence –  players hope there will be more announcements on stimulus packages to support, in particular, the beleaguered automotive sector.