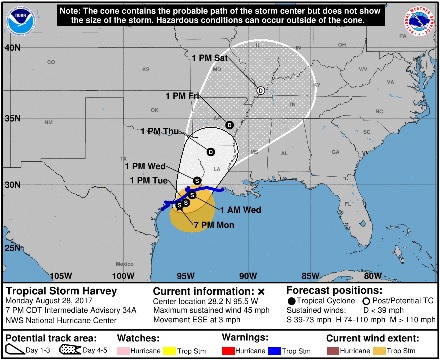 HOUSTON (ICIS)–Tropical Storm Harvey continues to pummel southeast Texas along the US Gulf Coast, disrupting operations at the nation’s hub for refineries and petrochemical plants, forcing a number of sites offline and prompting several companies to declare force majeure.

Harvey has brought over 25 inches (64 cm) of rain to portions of the region since Thursday, and another 10-12 inches is expected over parts of the upper Texas coast into southwestern Louisiana, the National Weather Service said late on Monday.

-INEOS force majeure on PP after effects on Chocolate Bayou and La Porte;

-LyondellBasell force majeure on BD after production loss at Channelview; and

-Chevron Phillips Chemical (CP Chem) shuts certain operations at Cedar Bayou and Sweeny, as well as other facilities as appropriate. Previously, the company said it was conducting a sitewide shutdown at Cedar Bayou.

-Dow Chemical shuts Seadrift operations. The company said it remains operational at remaining Texas sites. However, it had a process upset at Freeport olefins after a lightning strike to another facility.

-Enterprise said three of six propylene splitters at Mont Belvieu are in operation or in limited service.

-Enterprise’s ethane export terminal is out of service.

-INEOS has upset at Chocolate Bayou olefins 1 and 2.

-LyondellBasell scaled back operations at its Houston refinery.

-DuPont is down at its Victoria site for a previously planned outage. It will commence start-up activities when the weather improves.

-INEOS discovered a heat exchanger tube leak at its Pasadena site. Repairs are unable to commence until weather risks pass.

To view an interactive map of petrochemical plants in Texas, click here. Use the drop-down menu to see plants by products, and zoom in to see more details.