LONDON (ICIS)–Huntsman’s higher sales volumes of methylene diphenyl diisocyanate (MDI) in the third quarter could not offset lower selling prices, with the polyurethanes (PU) division posting lower sales and earnings year on year, the US chemicals major said on Friday. 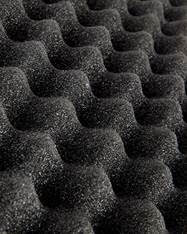 All other divisions – Performance Products, Advanced Materials, and Textile Effects – also posted lower sales and earnings during the quarter, year on year.

The negative set of results had already been announced by the company in July, when its CEO said full-year earnings could drop as much as 20%.

On Friday, however, Peter Huntsman said: “In spite of an increasingly challenging global economic environment, I have never been more pleased about our mix of businesses and the strength of our balance sheet.”

The company said lower MDI prices were recorded mostly in Europe and China, where the industrial slowdown has been the sharpest (see bottom graph).

As a result, its PU division under which MDI falls posted 12% lower sales ($993m) and sharply lower adjusted earnings before interest, taxes, depreciation and amortisation (EBITDA), at $146m.

In China, the company’s MDI volumes rose markedly after it started its new plant in the third quarter of 2018.

The Caojing plant has a production capacity of 240,000 tonnes/year; it is operated as a joint venture along with BASF, Shanghai Hua Yi (Group) Co, Shanghai Chlor-Akali Chemical Co and Sinopec Group Assets Management Corp.

The company said it was on course to close the divestment of its Chemical Intermediates and Surfactants businesses in early 2020, adding proceeds would stand at around $1.6bn.

At the time it announced the sale to Thailand’s major Indorama in August, Huntsman said proceeds would amount to more than $2.0bn.

At the Performance Products division, both sales volumes and selling prices fell on the back of weak markets and lower feedstocks costs passed on to customers.

–
MDI pricing US, Europe, China
Click on image to enlarge 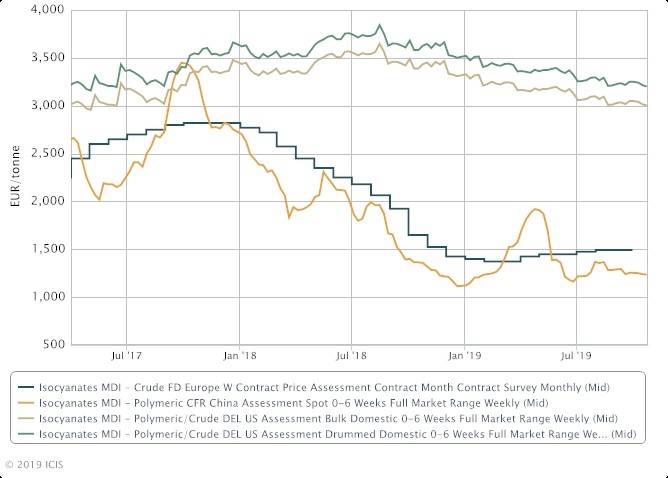 –
MDI is consumed mainly in PU foams, which account for about 80% of global consumption.

Rigid foams, the largest outlet for MDI, are used mostly in construction, refrigeration, packaging and insulation.