HOUSTON (ICIS)–Initial settlements for US January propylene contract prices are at a 9 cent/lb ($198/tonne) increase from the prior month, market sources said on Wednesday, although the settlement is not yet marketwide.

The contract price increase is in line with sharply higher spot prices amid tight supply as the market awaits the start-up of a new propane dehydrogenation (PDH) unit and the restart of an existing PDH unit.

The new PDH unit at Enterprise’s Mont Belvieu complex continues to ramp up after its start-up was delayed due to Harvey. Previously, the unit had been expected to start-up in September.

Meanwhile, an existing PDH unit at Dow Chemical’s complex in Freeport, Texas, was shut down in late December. Maintenance work on the unit could extend into February.

Another PDH unit, at the Flint Hills Resources complex in Houston, Texas, also was shut down last week after an upset. Operations at the complex have returned to normal. 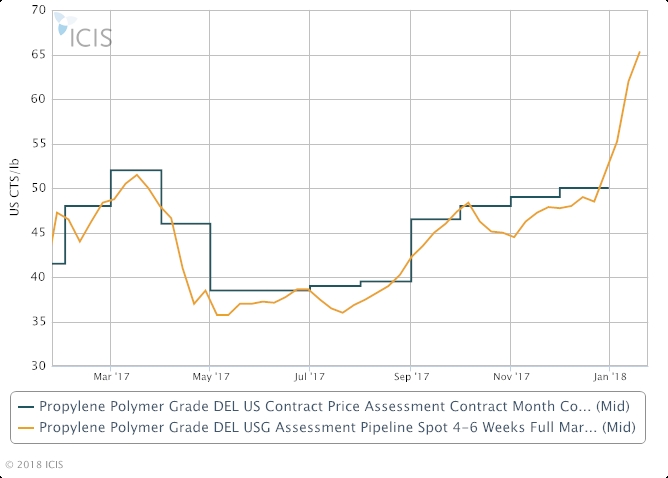