The market is anticipating that supply will begin to normalise in either the first or the second quarter of 2018, although earlier expectations regarding the likely normalisation of supply have proved premature.

Demand for downstream polyurethane systems is strong and is expected to see continued healthy growth in 2018. Polyurethane foams have excellent insulating properties, and the move across many industries to adopt more energy-efficient technologies is leading to greater demand for polyurethanes.

Rebuilding efforts in Texas, Florida and Puerto Rico following an active Atlantic hurricane season may provide an extra boost to polyurethane demand in the coming year.

Isocyanates are combined with polyols to produce polyurethane foams, which are used in a wide variety of applications in the construction, automotive, appliance and home furnishing sectors.

Higher raw material prices resulted in compressed margins for isocyanate buyers as most were unable to raise their end-product prices quickly enough to match the upward movement in isocyanate costs. Although buyers’ margins have faced compression, demand for downstream polyurethane systems, the primary end use for isocyanates, remained strong throughout 2017, amplifying supply shortages and helping to push through consecutive price hikes.

Executives from Dow and Covestro confirmed in November that MDI demand growth in recent years has outpaced industry anticipations, while at the same time, the isocyanate industry has struggled to bring new capacity on-line quickly enough to meet the additional demand.

Isocyanate markets across the globe faced significant supply shortages throughout 2017.

Germany’s BASF ran its 300,000 tonnes/year TDI plant in Ludwigshafen, Germany at reduced rates, with a back-up reactor from its initial restart in April through the end of the year. The market anticipates that BASF will only be able to install a new reactor and run its plant at normal rates in the first or second quarter of 2018. The plant was initially taken offline in November 2016 due to a technical defect.

Additionally, Sadara’s new MDI and TDI plants at its large integrated petrochemical facility in Al-Jubail, Saudi Arabia both started up in 2017 after delays. Sadara started up its 400,000 tonnes/year MDI plant in the summer of 2017, and commercial quantities from the plant began to appear in Middle Eastern markets in the fourth quarter. The company started up its 200,000 tonnes/year TDI plant in October and began sending out samples in November. Commercial production from the TDI plant is expected in the first or second quarter of 2018.

In addition to these global production issues, the US isocyanate market also experienced a series of plant disruptions and force majeures in 2017. BASF declared a force majeure on MDI from its 300,000 tonnes/year plant in Geismar, Louisiana in June, owing to high water levels of the Mississippi River, which impeded deliveries of feedstock benzene to the plant. The force majeure was lifted on 1 July.

Dow Chemical declared force majeure from its 340,000 tonnes/year MDI plant in Freeport, Texas on 31 August. The force majeure was lifted on 18 September.

With the market facing persistent supply shortages and demand growing at a faster than expected clip, isocyanate buyers had little alternative but to accept consecutive rounds of price increases, with some sellers heard to have taken a “take it or leave it” attitude towards their price increase initiatives, which would normally be at least partially negotiable. 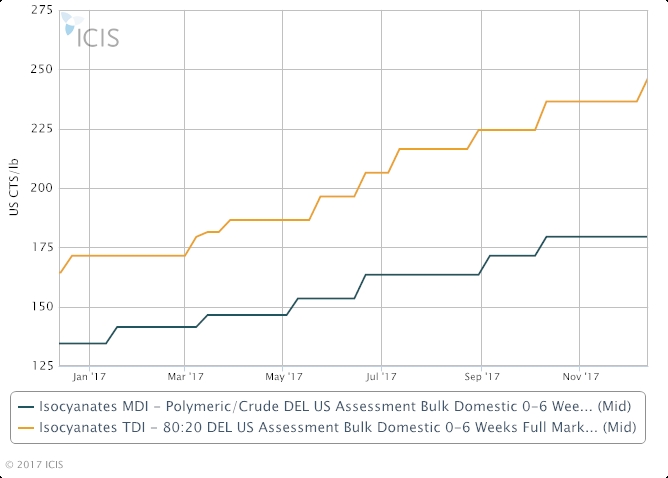 Major isocyanate producers in the US are Huntsman, Covestro, BASF and DowDuPont.