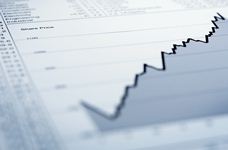 LONDON (ICIS)–Pre-buying during the first quarter and healthy industrial production rates pushed European chemicals’ prices up, but that level of performance is unlikely to be sustainable, chemical equity analysts at UK-based Barclays Bank said on Monday.

The “sweet spot” European chemicals enjoyed in the first quarter will be reflected in the financial results season to start this week, added Barclays.

“The first-quarter earnings season should be one of the strongest the sector has seen in some time. The upstream end in particular is benefitting from solid momentum supported by pre-buying as a result of rising raw materials prices,” said the analyst, referring to the gains posted by crude oil since December when producing countries decided to freeze or cut output.

The bank said it expects first-quarter sales volumes growth to come in at 2% on average for the European chemical industry, with higher rates in upstream due to the pre-buying observed during the first three months of the year in order to get materials cheaper.

However, the momentum described by the analysts would not be sustainable in the long term due to, among other factors, the existing oversupply in many markets, which is likely to haunt the industry for years to come. 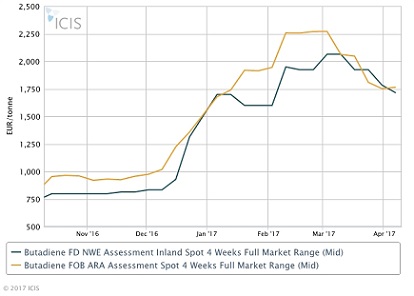 Financial tailwinds in the first quarter will come more from the pricing side, rather than the volumes side, a factor that made the Barclays analysts sceptical about the sustainability of the good performance.

“The oil price, up 55% y/y (Brent) clearly plays a role here. However, this does not tell the whole story as the prior year quarter was the trough ($35/bbl for Brent), while sequentially, the increase was a mere 7%. Raw material inflation can also be a negative, in particular for a sector that has been plagues by oversupply for the past few years,” said Barclays.

“The remarkable development this quarter, we think, was the increase in ‘net’ pricing, i.e. the expansion of products spreads… This has been a broad-based phenomenon across most key commodity products and occurred both in Europe and Asia.”

First-quarter prices stood at historic highs relative to their normalised levels versus the crude oil prices, the bonanza for chemical produces is likely to be temporary.

“Overall, ICIS reported in February that the number of unplanned outages/force majeures hit record levels. In addition, the inflationary trend led to pre-buying on top of solid underlying demand, which further aggravated the tightness.”

Among other products, the analysts said tightness was observed in products like benzene, toluene di-isocyanate (TDI), methyl di-p-phenylene isocyanate (MDI) or BD, among others.