Its That Time of Year

HOUSTON (ICIS)–Tropical Storm Ida formed on Thursday in the Caribbean Sea, and meteorologists expect it will become a hurricane before making landfall in southeastern Louisiana by Sunday.

Ida has maximum sustained winds of 40 miles/hour (65 km/hour), according to the National Hurricane Center.

It is 100 miles west-southwest of Negril, Jamaica and 130 miles southeast of Grand Cayman. It is moving northwest at 14 miles/hour. 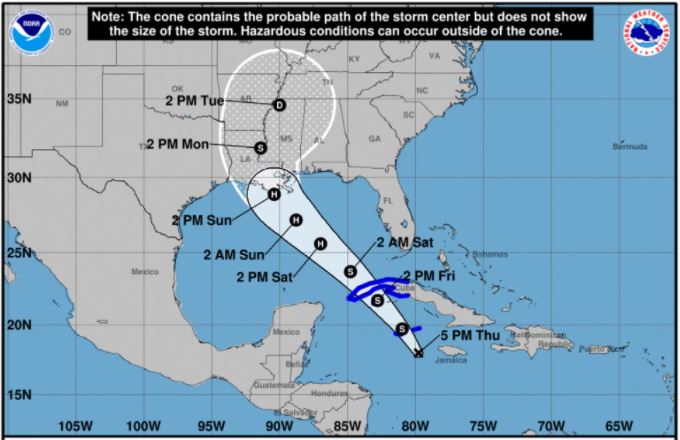 Projected storm paths have it crossing over the center of the US Gulf, where federal offshore oil production accounts for 17% of total US crude output, according to the Energy Information Agency (EIA).

Federal offshore natural gas production in the Gulf accounts for 5% of total US dry gas output.

Chevron said it is moving non-essential personnel off its platforms in the Gulf of Mexico, although production remains at normal levels.

Louisiana has several petrochemical plants and refineries, many of which dealt with the active hurricane season last year that saw Lake Charles get hit by more than one storm.

Markets are still recovering from the disruptions caused by last year’s hurricane season and winter storm Uri in February.

Markets could face another wave of disruptions if the storm makes landfall in Louisiana as a major hurricane.

Participants in US polymers markets said they are monitoring the situation.

A polymer distribution company told ICIS that it is warning customers of possible storm impacts stretching from Beaumont and Orange in Texas to Lake Charles in Louisiana by early next week.

Demand for both olefins is strong.

A majority of aromatics capacity is in the US Gulf region. Market participants could see key disruptions to supply and transportation of benzene if large-scale refineries were forced to halt production amid inclement weather conditions.

The US methanol market is facing tighter supplies and higher prices for natural gas feedstock.

With 95% of domestic capacity located on or near the Gulf Coast, any further disruptions to production could have severe ramifications.

Extreme supply tightness persists for US acetic acid and vinyl acetate monomer (VAM) with producers unable to keep pace with demand for both domestic and export markets.

Another hit to Texas-area production, similar to winter storm Uri, would be devastating to US inventories.

Base oil supplies could tighten further if a major hurricane were to disrupt ExxonMobil’s Group I Baton Rouge refinery or Chevron’s Pascagoula Group II refinery.

Butadiene supplies could tighten further if a major hurricane were to disrupt Shell’s Norco site or ExxonMobil’s Baton Rouge site.

Styrene supply right now is ample, but three Louisiana plants – one in Lake Charles and two along the Mississippi River – make up about 30% of North American styrene market share so a direct hit to Louisiana would have an impact.

The US polycarbonate (PC) market is very tight, and Sabic has a plant in Alabama that could have immediate effect on the market if it took a direct hit.

Feedstocks for polyethylene terephthalate (PET) are mostly located along the Gulf Coast.

US ethylene glycol (EG) supply is snug, with at least 25% of North American capacity offline for planned maintenance amid healthy demand into PET.

US EG production is situated in southwestern Louisiana and southeastern Texas along the Gulf Coast, and both plants and nearby ports are susceptible to hurricane damage.

US paraxylene (PX) supply has been plentiful in recent months.

Intermediate purified terephthalic acid (PTA) and PET production largely relies on imports of PX due to much of the production being located on the US East Coast.

Mexico receives most US PX exports so it would be most likely to be affected by any potential storm damage.

In acrylates, Dow has a facility in Taft, Louisiana, that could be impacted. Supply is still snug although largely improved since the spring.

Dow also has isobutanol and N-butanol facilities in Taft. Oxo-alcohol supply is snug-to-tight, and while production is improving, it is still difficult to obtain material, especially for spot buyers.

Glycol ethers have been tight recently because of the shortage of acetic acid. This impacts propylene glycol methyl acetate (PMA) in particular.

Shell has a facility in Geismar, Louisiana, and Dow has one in Plaquemine, Louisiana.

The US ethyl acetate (etac) market has been facing strong demand amid tighter than usual supply. If the storms hit any acetic acid or etac production located in the US Gulf, then the supply constraints could worsen.

US gasoline and refined product demand has been strong through the summer driving season, although it failed to reach 2019 levels. Demand is slowly trending downward on seasonal factors, although any supply impacts from storms in the US Gulf could place upwards pressure on the market.

While Latin America is not in the storm path, its markets that rely on US imports could be affected.

Any delay in resuming normal levels of US exports that can result from new plant disruptions will impact Mexico that is already short of supply for PE and PP.

As the storm approaches the coast, companies may choose to shut down chemical plants and refineries as a precaution.

If the storm makes landfall in southern Louisiana, flood gates in the state could be closed.

When the flood gates are closed, it prevents interchange among railroad companies with eastern carriers. That would cause delays in rail shipments, compounding the logistical constraints that have already disrupted markets.

The storm could also cause power outages, which could shut down petrochemical complexes in the area.

Click here for the topic page on US Gulf storms – impact on chemicals.