US Jan benzene settles down on lower demand 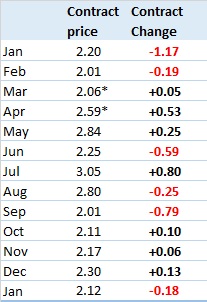 US benzene contract prices are typically settled on the last day of the prior month. However, with the New Year's holiday at the end of December, some contracts were settled a day early, a benzene source said.

That demand lagged in late December, ahead of the year end, putting downward pressure on spot prices. Further adding to the downward momentum, upstream crude oil values fell through most of December.

Benzene spot prices were heard in a range of $2.04-2.14/gal FOB in the week before Christmas. Little business was heard in the spot market during contract negotiations between the Christmas and New Year's holidays.

The lower benzene buying interest in late December might be due to buyers avoiding inventory build-up ahead of the year-end and buying activity may increase after the New Year, a trader said.

Demand had been strong for benzene derivatives, including styrene, cyclohexane, cumene and aniline in late 2015, the trader said.

The majority of US benzene is consumed in the styrene sector, which remains tight. Multiple outages earlier in the year combined with strong demand for US exports, alternately from Asia and Europe, have kept styrene inventories low.

With the resolution of the latest North American styrene outage in early November, late 2015 benzene consumption has been strong.

Demand also had been strong in late 2015 from the downstream cyclohexane sector, with more frequent deals for cyclohexane-grade benzene heard in November and December. Cyclohexane is an intermediate in the nylon chain.

The other derivatives are cumene, which is used to produce co-products phenol and acetone, and aniline, used to make isocyanates for the polyurethane chain. 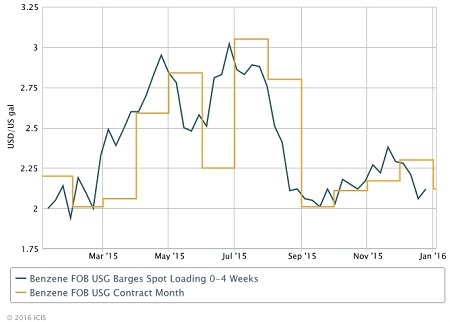