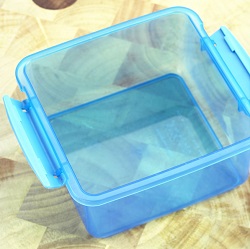 HOUSTON (ICIS)–Discussions for US June propylene contract prices have ranged from a slight increase to a slight decrease amid falling inventories and expectations of increasing supply.

May polymer-grade propylene (PGP) contract prices had settled at 38.5 cents/lb, a decline of 7.5 cents/lb. It was the second consecutive monthly drop in contract prices as supply recovered from a tight first quarter.

Amid the derivative turnarounds, propylene inventories have been falling over the last several weeks. Inventories for the week ended 2 June fell to 2.794m bbl, a 7.9% drop from the prior week, according to data from the US Energy Information Administration. 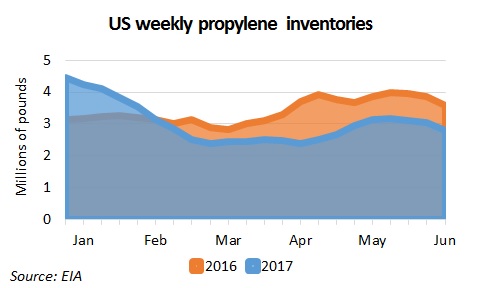 “Despite the drop in inventory, there is ample propylene available especially since demand is soft for a number of buyers,” a market source said.

Additionally, the market is anticipating the restart of a US Gulf propane dehydrogenation (PDH) unit will increase production and lengthen the propylene market. The unit, which began a 60-day turnaround in late May, has been expected to restart in early June, but market sources have said it has not yet done so.

While the falling inventories and restarting derivative plants are putting upward pressure on the propylene market, the expected restart of the PDH unit and anticipation of capacity expansion continues to exert some downward pressure.

We are interested in your views on data providers for price assessments, indices, news and analysis for the petrochemicals markets. This is your chance to express your views on the data and information sources you use. It will take less than five minutes to do.