HOUSTON (ICIS)–Initial June propylene contract price settlements are at an increase of 8 cents/lb ($176/tonne) from the prior month, although the settlement is not yet marketwide, sources said on Monday.

The increase follows a sharp jump in spot prices in late May amid a short outage for a propane dehydrogenation (PDH) unit and ahead of a turnaround for another PDH unit.

Propylene production from other sources also has been limited.

Most propylene is produced in refineries as a co-product of gasoline. Several refineries or their propylene-producing units have been offline in recent months due to turnarounds and outages.

The second largest source of propylene is from crackers as a co-product of ethylene. Low ethylene prices have limited propylene production due to an increase in the usage of ethane as a feedstock in the recent months. Ethane is the lowest cost cracker feedstock and produces very little propylene.

Propylene inventories have been falling in recent weeks. During June, they have remained below levels from the same month in the prior year, according to data from the US Energy Information Administration (EIA).

A full settlement is pending further confirmation from market participants. 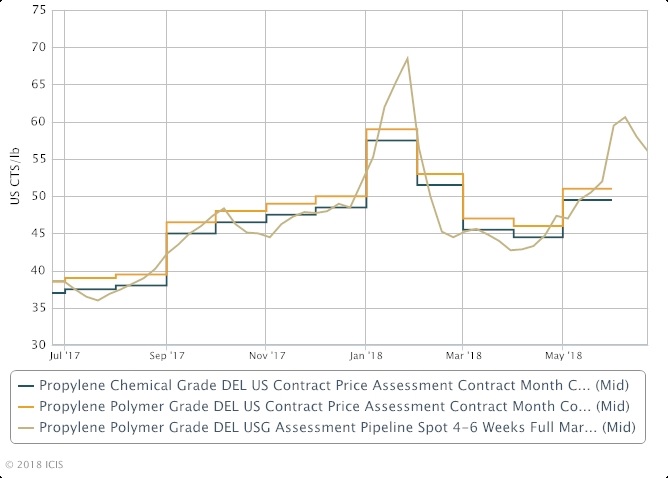