Contract values are heavily influenced by deal values in the benzene spot market in the week prior to contract settlements. Prior to the March settlement, benzene spot prices had been under pressure from high levels of imports and a plant shutdown in downstream styrene.

US benzene imports for January had been slightly higher than the prior month, according to data released by the US International Trade Commission. However, benzene values dropped drastically in January, partly on a nearly five times increase in volumes from South Korea from the prior month.

South Korea is a primary source for US benzene imports, and shipments from that country are watched closely, as expected import levels from the region can impact US benzene sentiment. 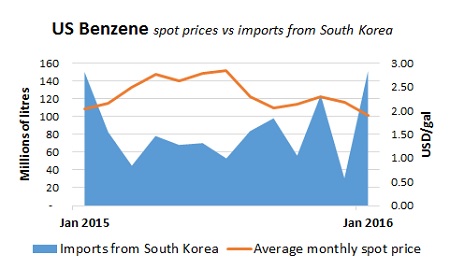 Imports from South Korea for February had been expected to remain at high levels, keeping downward pressure on the US benzene market. Further downward pressure resulted from a month-long turnaround in downstream styrene.

However, that pressure eased in early March. Imports inbound from South Korea were heard to be much lower than January or February levels. Additionally, the styrene turnaround was completed in early March, allowing full capacity for benzene consumption in the styrene sector.

Demand for benzene during first quarter has been healthy in all derivatives, especially for styrene production, the largest consumer of US benzene. The US styrene market has remained tight after multiple shut downs in early 2015 and strong export demand that has been persistent since late 2015.

The lower benzene imports and strong demand has kept benzene prices climbing throughout March. Spot deal values in the last week have ranged from $2.14-2.18/gal DDP (delivered, duty paid), compared with $1.74-1.80/gal in the week prior to the March contract settlement. 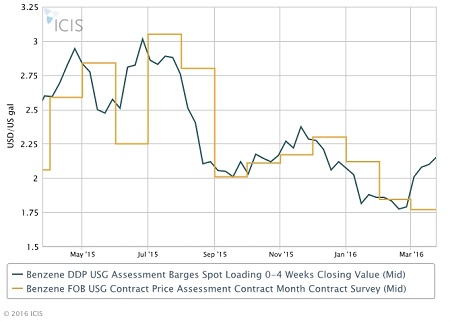 Expectations for April contract prices from market participants range $2.15-2.20/gal, which would be about 23% higher than the March contract.

Benzene contract prices are typically settled on the last day of the prior month, with the April contract expected to be settled on Thursday.