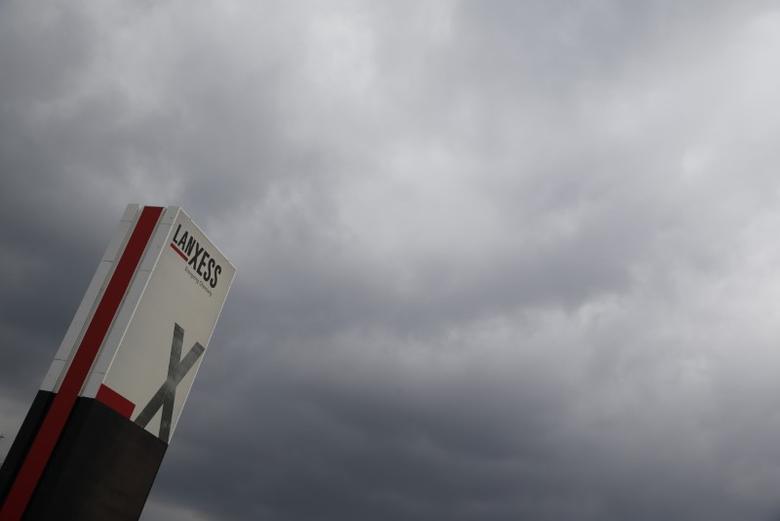 A logo of Lanxess is seen next to dark clouds at Cologne Bonn airport March 27, 2015. REUTERS/Wolfgang Rattay
By Ludwig Burger | FRANKFURT

Lanxess AG (LXSG.DE) is to buy U.S. speciality chemical company Chemtura (CHMT.N) for 2.4 billion euros ($2.69 billion) including debt in the German company’s largest ever takeover, moving it further away from its main synthetic rubber business.

Lanxess’s offer of $33.50 per share is a premium of about 19 percent to the Philadelphia-based company’s share-price close on Friday.

The world’s largest synthetic rubber maker will use existing funds and new debt to buy Chemtura, Lanxess said in a statement, describing the deal as its largest ever acquisition.

It is part of its push to diversify away from the synthetic rubber unit, which depends heavily on the car industry and is under pressure from rivals. It agreed to sell a 50 percent stake in that business to Saudi Aramco for 1.2 billion euros last year.

The Chemtura deal will help it boost its industrial lubricant additives and flame retardant additives businesses.

It follows the 2010 takeover of Dutch company DSM for around 310 million euros and Brazilian rubber producer Petroflex in 2008 for 280 million euros.

The shares rose 8 percent to their highest in more than a year on Monday, and were the best performers on the European STOXX 600 index .

UBS analyst Patrick Rafaisz said the price represented a multiple of 10 over earnings before interest, taxes, depreciation and amortization (EBITDA) and just seven times when including targeted synergies.

“The price paid for expanding is reasonable, in our view, and a refreshing discount to the early- to mid teens multiples that have become more typical in M&A during the last few quarters,” Rafaisz said.

The boards of both companies have unanimously approved the deal, which is expected to close around mid-2017, Chemtura said in a separate statement.

Lanxess also said it will no longer pursue its earlier-announced share buy back of around 200 million euros.