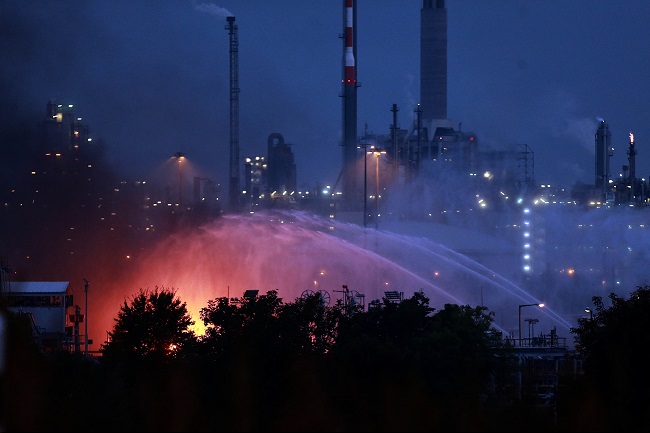 LONDON (ICIS)–German chemical major BASF’s full-year earnings may be reduced by as much as 3% as the closure of its two steam crackers and other plants at its hub site in Ludwigshafen has affected ethylene (C2) and propylene (C3) value chains, a chemical analyst at German investment bank Baader Bank said on Tuesday.On Monday, an explosion at BASF’s Ludwigshafen site caused a consequent fire which left two people dead and one missing, while eight workers suffered serious injuries, according to BASF’s latest update at 10:00 London time on Tuesday. It added that 17 more people had suffered minor injuries.

While the fire was extinguished at 21:30 on Monday, the site remains closed as firefighters and authorities continue investigating the accident. BASF said earlier that, in addition to the steam crackers, around 20 other plants were either closed or partially running.

A BASF source, when asked about a potential declaration of force majeure as the extent of the accident becomes clearer, said: “Everything is under analysis.”

Baader Bank’s chemical analyst Markus Mayer said despite the fire being extinguished, the closure at the site may last three months while the company’s own investigations, as well as those from the authorities, take place.

The closure of the two steam crackers has affected as many as 20 plants, according to the company, and Mayer said the fire could cause the loss of between 1% and 3% of 2016’s earnings before interest, taxes, depreciation and amortisation (EBITDA).

“In a nutshell: ca. [circa] 6% of BASF yearly EBITDA might be directly impacted by the fire. The shutdown might last more than a quarter, in our view. Therefore, 1-3% of EBITDA might be at risk,” he said.

Sources in the petrochemical industry in Europe were still assessing the accident’s impact in the markets. A source said it was more concerned about the derivatives coming out from Ludwigshafen than the shutdown of the crackers themselves.

While ethylene can be supplied from several other sites in Europe, the importance of BASF’s derivatives operations at its flagship site made the source uneasy over the possibility of a prolonged shutdown which could impact its own operations.

“We buy a million products from them… I worry more about derivatives than the cracker products,” it said.

Other ethylene and propylene sources said on Tuesday morning it was too early to determine the impact of the accident in the wider markets.

The analyst said the disclosure to ICIS by a company source on Monday that naphtha imports into the site had been halted prompted the company to concede that both C2 and C3 were affected, although it did not specify how long the shutdown may last.

According to Baader Bank’s analyst, ethylene accounts for 18% of BASF’s sales of that product, while the combined operations of ethylene and ethylene oxide (EO) coming out from that German site would total 24% of the total in that segment.

Meanwhile, propylene produced at Ludwigshafen accounts for 13% of the company’s sales for that product, according to Mayer, while the site’s combined propylene and propylene oxide (PO) operations would account for 19% of BASF total sales in that business.

“But as acrylic acid [AA] is also close to the C3 value chain it should be impacted as well. In Ludwigshafen, AA stands for 21% of BASF AA [operations],” he added.

BASF’s investors appeared not too concerned by the news on Tuesday morning. By 10:05 London time, the company’s stock was rising by 1.43%, compared to their close on Monday, to €79.40.