The change is even more dramatic in 2017, but in the opposite direction. The first quarter was very mundane with only $11.2bn of deals closed. However, we expected the first wave of the mega deals to start closing in the second quarter and they did. As a result, $63.5bn worth of deals closed in the second quarter, leading to a total of $74.7bn in the first half of 2017 alone. 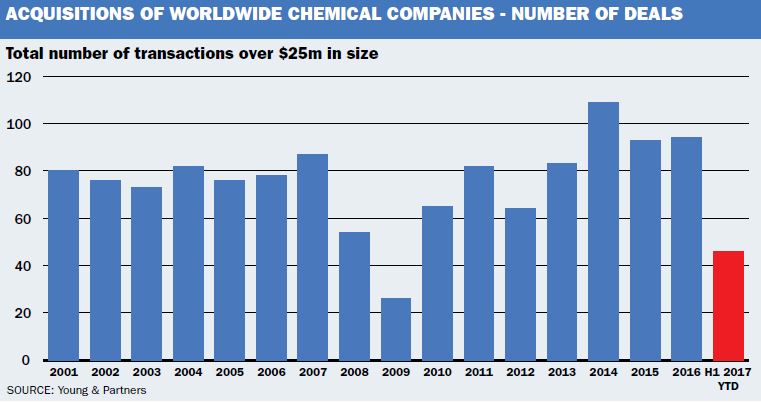 This surge was driven not by the number of deals, but the closing of two mega deals – ChemChina/Syngenta for $45bn and Sherwin-Williams/Valspar for $11bn. More mega deals are expected to close by the end of the year – Dow/DuPont and PotashCorp/Agrium. Although there are a few other mega deals in the pipeline (Bayer/Monsanto, Praxair/Linde, Huntsman/Clariant), very few of these are expected to close this year.

When you look past the dollar volume headlines and the impact of just a few mega deals, the picture can look quite different – both positively and negatively.

Asia has exploded as the place where businesses are being sold with 50% of all of the targets being Asian companies. Many of the Asian deals are consolidation transactions in China as the Chinese government has encouraged mergers to reduce the number of competitors. But if Asian targets are 50% of the market, that means that all of the rest of the world is squeezed into the remaining 50%.

Whether that is good or bad for acquiring or selling companies depends on their situation, but it certainly has made life difficult for the private equity firms. Rightly or wrongly they avoid acquiring companies in China and tend not to have much interest in commodity chemical deals.

That forces them to focus on just specialty chemicals where they have to compete with growth seeking strategics or businesses with aspects that make them less interesting to strategic buyers. As a result, their share of deals in the first half was only 8.7% of the number of acquisitions and 5.7% of the dollar volume.

So, some parts of the market are hot (overall dollar volume, specialty chemicals and Asian deals) and other parts are not (commodity chemicals and private equity acquisitions).

OUTLOOK FOR H2 AND BEYOND

We expect 2017 will be a record in terms of M&A dollar volumes as a result of the three or four mega deals that have closed or will close by year end. However, the number of deals that close will be flat compared to last year – solid relative to history, but well below previous records.

Low interest rates, strong profits and cash flows and the desire to grow will fuel strategic acquires globally. The market will continue to be very attractive for sellers of specialty chemical businesses, whether they are private or public owners. However, the commodity chemical space will continue to be more of a buyer’s market on reduced deal volumes. The pace of consolidation related mergers in China will continue, with a great deal of encouragement from the Chinese government. None of us should be surprised if they come up with their own mega deals via mergers of large state-owned chemical enterprises.

And lastly, the mega mergers will be followed by divestitures – some required for antitrust reasons, others driven by refinements of the combined company business portfolios.

Peter Young is president and managing director of Young & Partners which is completing its 22nd year as a focused chemical and life science industry investment bank serving the M&A, financing and financial advisory needs of clients in North America, Europe, Asia and South America. Its focus is on providing in-depth industry expertise, excellent technical investment banking skills and senior management on every transaction, without the conflicts of interest inherent in most other investment banks. Visit www.youngandpartners.com. Peter Young can be reached at pyoung@youngandpartners.com or 212-682-5555.