HOUSTON (ICIS)–US March benzene contract prices settled on Tuesday at $3.25-3.27/gal, down 7 cents/gal from the prior month, market sources confirmed.

The decline follows several months of contract price increases, including a sharp increase for the February settlement. 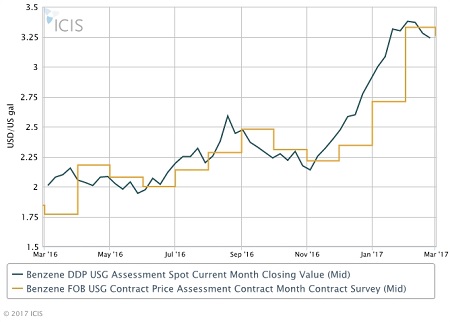 Benzene values had been pressured higher from late 2016 and into early 2017 largely by limited imports from Asia, some domestic production issues and occasional demand for US benzene exports. The limited import levels have been most notable from South Korea, which has been the largest supplier of US benzene imports for the past several years.

While imports from South Korea and the Asian region remain limited, market sources have heard cargoes inbound to the US Gulf. The expected material has eased some of the upward pressure on benzene values in the recent weeks.

However, most downward pressure has come from several outages in downstream styrene, which is the largest consumer of US benzene. 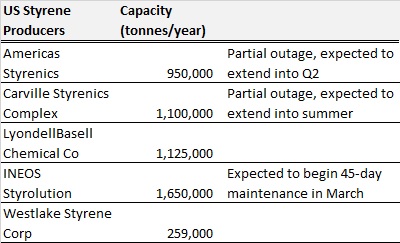