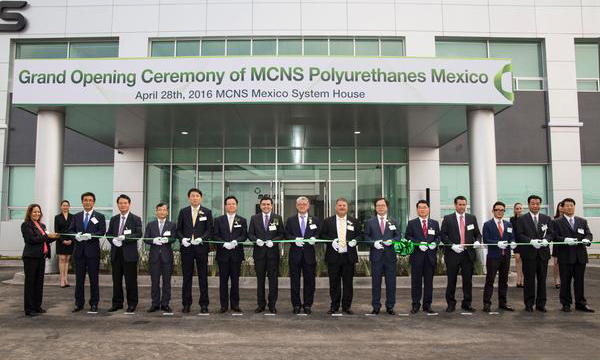 Mitsui Chemicals & SKC Polyurethanes Inc. (MCNS), a joint venture between Seoul-based SKC Co. and Tokyo-based Mitsui Chemicals, announced that it has completed building its new facility in Mexico that is expected help the polyurethane materials manufacturing joint venture expand its presence in Central and South America.

According to SKC on Sunday, the joint venture held a ceremony on Friday for completing the construction of its new polyurethane system house facility in Chico in Monterrey, the capital of northeastern state of Nuevo Leon, Mexico. A system house is a manufacturing facility that produces customized polyurethane raw materials. The new facility with an annual capacity of 20,000 tons of polyurethane raw materials will up MCNS’s annual production capacity to 720,000 tons.

Won Ki-don, co-chief executive of MCNS, said that the new system house in Mexico should pave the way for the company to make aggressive inroads into other markets in Central and South America. The joint venture plans to build system houses in 20 locations, up from the current 10, by 2020 including two in India. Won said that the company aims to become a global polyurethane manufacturer generating 2 trillion won ($1.75 billion) or more in sales by 2020.

MCNS was launched in July, last year, based on a 50-50 investment by SKC and Mitsui Chemicals. The joint venture’s sales reached $1.5 billion in 2015.